Ancient whalers leave their mark on the north

The high arctic is one of the farthest places from most of the 6 billion people on Earth, but Canadian researchers have found that the far north holds some of the oldest evidence of human impact on a lake’s ecosystem.

John Smol, of Queen’s University in Ontario, is a frequent visitor to Canada’s high arctic, a treeless world of tundra, lakes, and constant winds. From about A.D. 1200 to A.D. 1600, the Thule people—descendents of the Native whalers of northern Alaska—lived in the area, making homes out of rocks, peat and whale bones. Though the Thule people left the area about 400 years ago, Smol and his colleagues found that the ancient people changed the water chemistry of local lakes and Thule homesites are still affecting lakes today. 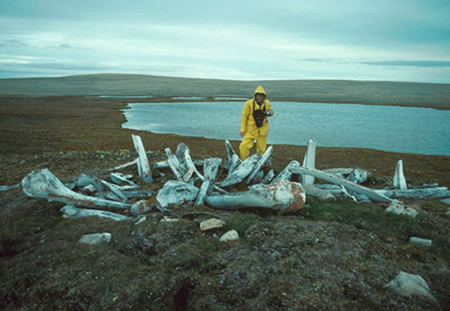 A whale bone dwelling on Bathhurst Island in Canada’s high arctic, with researcher Allen McCartney standing nearby. Scientists have found that the people who lived at these ancient sites changed the chemistry of nearby lakes, perhaps the oldest evidence of mankind altering an aquatic ecosystem in Canada or the U.S. Photo by J.M. Savelle.

Smol is a scientist who reconstructs the past by looking at ancient creatures preserved in the muck at the bottom of lakes. He’s most interested in diatoms—single-celled algae with cell walls made of glass. This glass, or silicon dioxide, makes diatoms last hundreds of years; diatom skeletons are a major component of the sediment at the bottom of lakes.

Smol and Marianne Douglas from the University of Toronto have sampled lakes and ponds in the high arctic for about 20 years. Their goal is to track past climate by seeing changes in diatom species over the years. Almost all the waters they sampled have been very low in nutrients, but lakes near abandoned Thule whaling sites are often high in nutrients and contain many diatoms that are different than those found in other lakes.

One lake showing evidence of ancient whaling activity is located on Somerset Island in Canada’s arctic, at a latitude farther north than Barrow, Alaska. About 1,000 years ago, Natives from northern Alaska moved eastward into Canada’s high arctic, bringing along their whale-hunting skills and tools. The hardy people used skin boats called umiaks which allowed them to harpoon whales in open water. James Savelle of McGill University, the archeologist on the team, estimated that the Thule people used up to 60 percent of each whale carcass.

“They used bones (for rafters and wall supports), blubber for heat, and the meat as food,” Smol said. “They were an ecologically efficient people.”

Preserved by a climate that resembles a freezer for nine months and a refrigerator for the other three, the crumbled whale-bone structures of the Thule are easy to find in the wide-open country, and the Somerset Island site contains the remains of 11 whale bone houses and at least 125 bowhead whales. In a lake nearby, Smol and his colleagues found elevated levels of phosphorus, organic carbon, and calcium. The nutrients have nurtured the growth of mosses and certain groups of diatoms.

The Thule people left the site about 400 years ago, probably due to a decline in bowhead whales caused by the increasing summer ice cover, Savelle said. When they moved on, they left behind faint but lasting evidence of their stay.
“It’s ironic,” Smol said. “We tend to think of the high arctic as pristine, and I think we now have one of the oldest records of human impact on an aquatic ecosystem.”