Understanding how ocean conditions and climate impact salmon year class strength is an objective of the Auke Bay Laboratories (ABL) Southeast Alaska Coastal Monitoring (SECM) project. The SECM project has collected a time series of indexes that include juvenile salmon and their associated biophysical data in coastal Southeast Alaska (SEAK) since 1997. Pink salmon returns are notoriously difficult to forecast because their two-year life history cycle only involves one ocean winter and precludes the use of younger returning age classes to predict cohort abundance. Moreover, year-class success varies widely, with harvests ranging from 3 to 95 million fish annually in SEAK since 1960.

Fortunately, direct measures of juvenile pink salmon abundance at sea from SECM sampling have provided a powerful tool to improve forecasts. Juvenile salmon marine mortality is reported to be high and variable during their initial spring nearshore residency. The SECM sampling of juveniles, which occurs later in the summer in seaward migration corridors, has proven to be an effective index for use in pink salmon forecast models for SEAK. 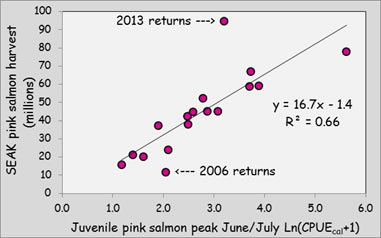 The SECM forecast models have performed well in 8 of the past 10 harvest years, giving estimates that averaged within 9% of actual harvests. However, the 2006 harvest was well below the forecast and the 2013 harvest was well above the forecast. Step-wise multiple regression models have been developed that include additional environmental parameters beyond CPUE if they significantly improve model fit and help to explain later ocean conditions that affect year class strength. The SECM preferred forecast for 2015 is based on a two parameter model with CPUE and a temperature index.

The SECM forecasts have been reported to the Southeast Alaska Purse Seine Task Force Meeting (PSTFM) since 2005. This annual meeting is open to the public and is jointly sponsored by the Alaska Department of Fish and Game and the Southeast Alaska Seiners Association. Resource stakeholders attending the meeting include fishing processors, fishermen, state managers, and researchers. 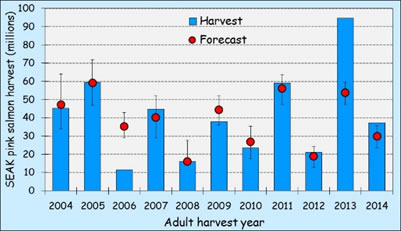 For more information on the 2015 forecast model, including a matrix of selected variables associated with SECM juvenile pink salmon data and alternative forecast models, please refer to the presentation and handout given at the PSTFM held in Petersburg, Alaska, on December 3, 2014 (handout and presentation in pdf format).

From a NOAA press release.

Watch an underwater salmon video – inside a surface trawl