Occasionally, humpback whales in Southeast Alaska will feed in coordinated groups using bubbles to trap fish at the water’s surface. This behavior is known as bubble net feeding. Bubble net feeding involves anywhere from 4-20 whales all working together to herd schooling fish into dense schools in order to maximize the feeding productivity of the group.

While many other whales and other animals use bubbles to assist in prey capture, the specific methods used in this complex feeding strategy are unique to whales in Southeast Alaska and are seen only in certain areas and seasons. To summarize the bubble net feeding technique; a group of humpbacks will dive down to herring schools where one whale (the bubble-blower) will release a ring of bubbles from its blowhole as it spiral beneath the prey. As this air rises to the surface, it creates a curtain of bubbles that acts as a physical barrier to frighten and retain the school of herring.

Simultaneously, another whale in the group will produce resonating vocalizations, which also act to frighten the prey and trigger them to school up in tight balls within the bubble net. The whales then orient below the schooled fish and lunge, mouths open, to the surface through the center of the bubble ring, or bubble net. This motion drives the fish to the surface, where they are trapped from all sides (the surface of the water above, the bubble curtain on the sides and the open mouths of whales below). The whales will break the surface of the water in unison with mouths wide open, and then close their mouths while roll at the surface as they force the water from their throat cavity out through their baleen plates; the sieving process which allows them to swallow their catch without having to swallow excess saltwater. 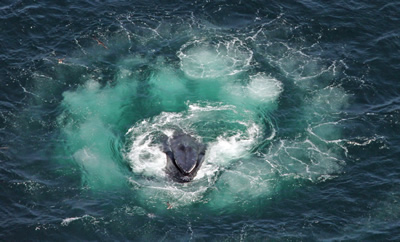 Perhaps the most amazing aspects of this feeding behavior are in the precision and organization of the group. The whales in a bubble netting group will surface in the same relative orientation with each successful bubble net, in some ways this behavior can be viewed as a highly organized dance. Further, it is fascinating that these animals are capable of coordinating this behavior while partitioning tasks to increase the overall efficiency. This behavior signifies complex social interactions within humpback whale populations, which are poorly understood and documented.

Research groups, such as Alaska Whale Foundation, strive to understand the various roles of the whales involved in these groups, the full purpose of the vocalizations and bubbles, and to document the individual whales that partake in order to shed more light on this complex and fascinating display of animal cooperation.

Humpbacks feed primarily in summer and live off fat reserves during winter. They feed only rarely and opportunistically in their wintering waters. The humpback is an energetic hunter, taking krill and small schooling fish such as herring, salmon, capelin, and American sand lance, as well as mackerel. Krill and copepods have been recorded as prey species in Australian and Antarctic waters. Humpbacks hunt by direct attack or by stunning prey by hitting the water with pectoral fins or flukes.

The humpback has the most diverse feeding repertoire of all baleen whales.Its most inventive technique is known as bubble net feeding; a group of whales swims in a shrinking circle blowing bubbles below a school of prey. The shrinking ring of bubbles encircles the school and confines it in an ever-smaller cylinder. This ring can begin at up to 98 ft in diameter and involve the cooperation of a dozen animals. Using a crittercam attached to a whale’s back, researchers found that some whales blow the bubbles, some dive deeper to drive fish toward the surface, and others herd prey into the net by vocalizing. The whales then suddenly swim upward through the “net”, mouths agape, swallowing thousands of fish in one gulp. Plated grooves in the whale’s mouth allow the creature to easily drain all the water initially taken in.

A study published in the April 26, 2013 issue of Science documents a new form of bubble-net feeding called lobtail feeding among a population of whales in the Northern Atlantic Ocean. This technique involves the whale slapping the surface of the ocean with his tail between one and four times before creating the bubble net.Using network-based diffusion analysis, the authors argue that the whales in this group learned the behavior socially from other whales in the group over a period of 27 years in response to a change in the primary form of prey.

Given scarring records, killer whales are thought to prey upon juvenile humpbacks, though this has never been witnessed. The result of these attacks is generally nothing more serious than some scarring of the skin, but young calves likely are sometimes killed.