Skip to content
Previous Next
What Causes the Aurora Borealis?

What Causes the Aurora Borealis?

By Larry Gedney and Vladimir Degen

During the early 19th century, some of the best scientific minds of the period believed that the aurora was caused by the reflection of sunlight from tiny ice crystals suspended high in the atmosphere. It remained for the Norwegian physicist Anders Angstrom (1814-1874) to prove that this could not be true (The term “Angstrom” is probably familiar to high school physics students and to most people who deal with optics. It is a unit of distance used in measuring light wavelengths and is equal to 0.00000001 centimeters).

Angstrom reasoned that, if the aurora was truly reflected sunlight, then it should have the same spectrum as direct light that we receive from the sun. Sunlight, although appearing nearly white to us, is actually a mixture of the visible spectrum ranging through violet, blue, green, yellow, orange and red–the colors found sequentially in a rainbow from sunlight being broken down by raindrops acting as small prisms. 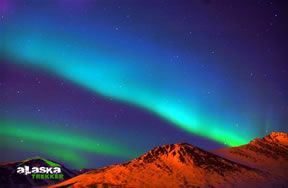 The different colors observed are dependent on wavelengths of the light, and wavelengths in the visible spectrum range from about 4000 Angstrom units in the violet to about 7000 in the red. A prism reveals that the sun produces a nearly “continuous” spectrum. That is, there is essentially no break in the gradual merging of one color into another.

Angstrom was one of the first to apply the prism and spectroscopy to auroral lights, and discovered that it yielded a “discontinuous” spectrum, with only a few discrete colors represented. Thus, it could not be reflected sunlight.

By the middle of the 19th century, physicists had found that by passing electric current through a low pressure gas (a precursor of modern neon lights, fluorescent lights, etc.), they could generate discrete spectra characteristic of that particular gas and no other.

At the time, it was not well understood why these phenomena occurred, and it has only been in fairly recent years that they have been satisfactorily explained and applied to the aurora. 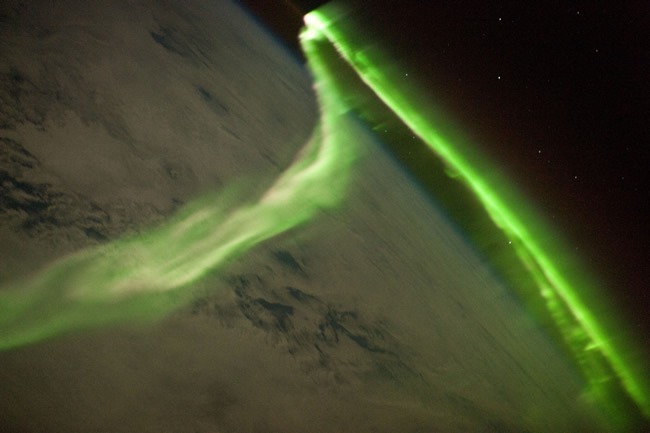 In the low pressure “gas discharge” tubes, the atoms are struck by the streaming electrons and change to a higher energy state. This process is called excitation. However, the atoms cannot remain in this state very long and must return to the normal condition or “ground state.” In doing so, they give up some of the energy that was imparted by the colliding electron and emit it in the form of the colored lights peculiar to each element.

The aurora is produced by a process entirely similar to that which occurs inside laboratory discharge tubes. The pressures are roughly the same, and the electric current for the creation of the aurora is supplied by a continuous flow of electrons from the sun.

It is a process analogous to the “electron gun” in the rear of a television set that fires electrons onto the screen in front. As they enter the earth’s atmosphere, electrons from the sun strike and excite atoms and molecules of the atmosphere (molecules are just combinations of atoms) in much the same manner as neon atoms in a tube are excited by the man-generated current.

One problem that Angstrom encountered was trying to identify the element that produced the typically greenish-white light observed in the aurora. It was not until 1925 that two Canadian scientists identified atomic oxygen as being the agent responsible. Atomic oxygen consists of only one oxygen atom, and is rare in the lower atmosphere. From day to day, we on earth survive on molecular oxygen, which combines two atoms (ozone has three).

A complex set of interactions occurs when the electrons from the sun enter the earth’s outer atmosphere. Its first collision is most likely to occur when it strikes a nitrogen molecule (two nitrogen atoms) and ionizes it (knocks out an electron, leaving it with an uneven charge). This produces an emission in the ultraviolet range which is invisible to the naked eye. The ejected electron and the one that knocked it out of the nitrogen molecule then travel further down into the atmosphere, bumping into more atoms and molecules as they go. Thus the aurora appears brighter near its lower border at an altitude of around 70 miles as the atmosphere gets denser and the energetic electrons are slowed down and experience more collisions. The greenish-white light observed here is produced primarily by atomic oxygen.

If the incoming electrons are energetic enough (as during a magnetic storm on the sun), they may travel to lower altitudes where they excite other exotic species of oxygen and nitrogen molecules. The processes here are very complex and not entirely understood, but they are responsible for the red fringe sometimes seen skirting the bottoms of auroral bands and arcs.

During great magnetic storms, another type of red aurora can occur at altitudes as high as 180 to 240 miles. This type of aurora can be attributed to another excited state of atomic oxygen, and can be very spectacular and widespread. Historically, it is the type of “bloody red” aurora that instilled fear in medieval days as being a harbinger of war, death, famine and other nasty things.

On February 11, 1958, I was a student at the University of Nevada in Reno, and happened to be parked on a hill just outside of town with a friend. We were both entranced when the skies became red halfway from the horizon-to the zenith. I have since learned that this was the “Great Red Aurora” of 1958, which was seen as far south as New Mexico.

Fortunately, the team of scientists at the Geophysical Institute was already geared up for the “International Geophysical Year” of 1957, and made many valuable observations of this dramatic event. It remains a memorable occasion for many Alaskans who were here at the time.

This column is provided as a public service by the Geophysical Institute, University of Alaska Fairbanks, in cooperation with the UAF research community. Larry Gedney is a seismologist at the Institute.