Fat the only fuel for migrating Alaska salmon

[fusion_dropcap]A[/fusion_dropcap]s you read this, salmon are darting through the deep blue ocean off Alaska, eating everything they can catch. Some of those brilliant silver fish are packing on fat to power them 1,500 miles up the Yukon, past Eagle and well into Canada. They will not eat during the journey.

“Fat is the gasoline in their tank,” said biologist Joe Margraf. “Migrating salmon start their trip with that tank, and there’s no refueling along the way.” 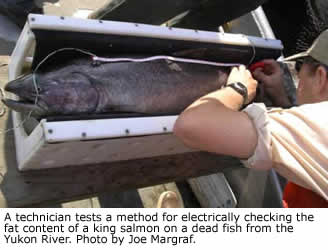 Margraf and other scientists have been experimenting with a method to check the primary health indicator of migrating salmon-the fat within their bodies-without killing the fish. Margraf is a fisheries professor with the USGS Alaska Cooperative Fish and Wildlife Research Unit at the University of Alaska Fairbanks.

Salmon entering the Yukon River begin their journeys to spawning grounds with huge fat reserves. At the Yukon River’s mouth, 20 percent of a fish’s body weight might be fat.

“(Fat) is what makes salmon such an amazing food,” Margraf said. “They have this high percentage of fat, and it’s all omega-3s, the good stuff.”

Fish caught on the lower Yukon are often dripping with fat even after people preserve them by smoking. Fish upriver have lower percentages of fat, and as they make it to their spawning grounds, water replaces most of the fat within their cells. A test of spawning male chum salmon on the Delta River showed that 75 percent of their body weight was water after an 850–mile journey from the mouth of the Yukon.

With a reliable indicator of the energy content of Yukon River salmon, biologists could see what shape the fish are in at certain points in the river, and maybe see if any environmental changes are affecting the fish, Margraf said. He and his colleagues are experimenting with a device that they hook up to a fish like tiny jumper cables. A small box then sends a harmless electric current through the fish, and the biologists get a reading of fat and water content within the fish.

They’ve tried the unit on 134 fish-chums captured at the Yukon’s mouth at Emmonak; chinooks at “the Rapids,” a fish camp upriver from the village of Tanana; and chums again on the Delta River near the town of Delta Junction. They found their results were similar to those from a conventional lab method, in which fish are “homogenized” in a blender. Lab technicians analyze the salmon slurry for fat and water content.

Though Margraf’s method needs more testing and calibrating for different species of salmon, he said it would help biologists to save fish (“It’s pretty hard to put the fish back together after you homogenize them.”) Biologists also wouldn’t have to handle the fish for more than a minute or so and they wouldn’t have to haul fish from a field site. And there’s a tie to global warming, too: Learning about the fat in Yukon River salmon might someday allow scientists to see how variables like warmer water temperature or a faster river due to melting glaciers would affect salmon.

“At what level might global change eat into a fish’s energy level to get upstream?” Margraf said. “The amount of fat they have has been tuned by hundreds of generations of fish. Anything that affects their fuel efficiency has the potential to reduce the survivability of their eggs.”