In her study of one of the farthest north lynx populations in North America this summer, Claire Montgomerie used her ears. While looking at the satellite tracker a female lynx was wearing, Montgomerie saw the animal was hanging around a hillside north of the Arctic Circle, not far from Coldfoot.

The University of Alaska Fairbanks graduate student suspected the lynx might have paused in its constant wandering to give birth to a den of kittens.

Montgomerie enlisted a few helpers from her base in Wiseman and headed to where she’d seen clusters of tracking points on her computer. After about 45 minutes in the boreal forest near the Dalton Highway, she got her break.

“I heard this little hissing noise,” Montgomerie said. “It was very subtle, like a breath.” 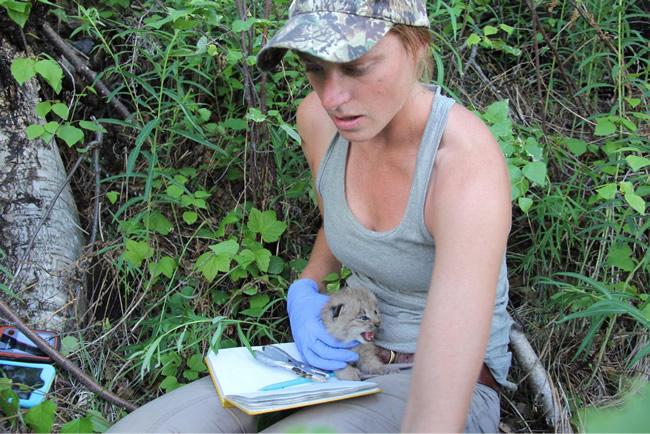 She approached the feline whisper, poked her head in some brush and parted a few birch saplings. There, at the root ball of a downed balsam poplar, were six lynx kittens the size of yarn balls.

Montgomerie’s work is part of a study of the factors contributing to the cycles of lynx and snowshoe hares. She is on a university and National Park Service team working out of Wiseman. The researchers, including Knut Kielland, Maddie McConnell and Donna DiFolco, are looking at hares, lynx and great horned owls at the northern edge of the boreal forest.

At the den site, Montgomerie picked up each tiny lynx — less than two weeks old and still with cloudy eyes that didn’t seem to focus on her — and weighed it. Each little cat was about 600 grams, about as much as a basketball, and fit in her palm.

“They were definitely one-handable,” she said.

She punched a tag in their ears in hopes of identifying the kittens again should she capture them as adults. Then she and her partners replaced the kittens and tried to make the site look as it did before they arrived.

Back in Wiseman, Mongomerie opened her computer and watched the satellite tracking collar of “Rosie,” the mother lynx that was not present when Montgomerie was at the den. Rosie, whom the team had captured in a nearby cage trap in March, had returned to her kittens on the hillside. Her collar showed she then moved them, perhaps mouthing each at back of the neck and carrying them to a new den site within a half mile of the old one.

The northern study of lynx, hares and great-horned owls is an attempt to understand more about the intriguing boom and bust life cycles of both hares and lynx. About every 10 years, hares are quite numerous in different zones of their forest habitat. This is followed by a population crash that affects their many predators, but none so much as lynx, whose diet is almost exclusively snowshoe hares.

Montgomerie, a masters degree student, visits the Wiseman area year-round, working networks of live traps for hares (several grids of 40 traps each) and lynx. She is trying to estimate the local population of hares, which are now easy to find in the Wiseman area but may still be about three years from peaking, according to Kielland, a UAF professor.

She wants to help answer questions long explored by scientists from Kluane Lake to Tok and beyond. Do hares peak in eastern Alaska first and then a bit later in western Alaska? Why does the cycle fluctuate like it does? Why do hare numbers rise, fall and stay low for a while? And what drives the roller coaster? A lack of hare food? Predators eating many of the hares? Stressed hares not having as many babies?

“There’s all kinds of contributors,” she said. “We’re just trying to see what’s happening up there.”