Ed Berg has spent much of his life observing the natural happenings on a large peninsula (the Kenai) that juts from a larger peninsula (Alaska). The retired ecologist who worked many years for the U.S. Fish and Wildlife Service has been around long enough he might see a second version of the most damaging insect attack in Alaska history.

The insect is the spruce bark beetle. About the size of a grain of rice, billions of the black specks attacked spruce trees of the Kenai Peninsula during the 1990s. Their larvae girdled trees, cut off their sugar supply and slowly killed them. Three million acres of spruce trees died, including the ones on Berg’s property in Homer. After he and his wife Sara cleared the trees, their place didn’t feel the same. They moved. 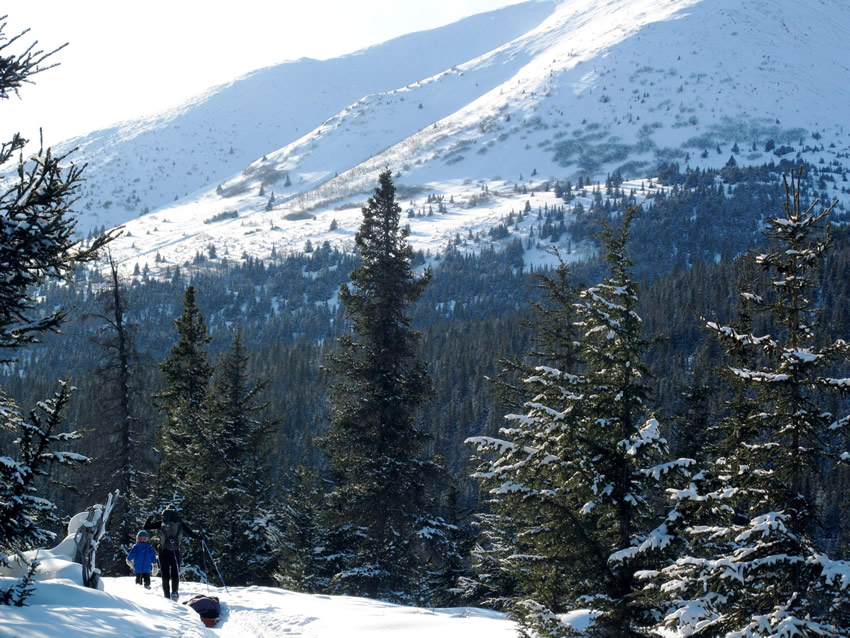 Spruce trees mixed with hemlocks on the Kenai Peninsula. Spruce bark beetles killed 95 percent of mature spruce there in the 1990s. Photo by Ned Rozell.

Berg needed to know why the beetles attacked with such vigor. He thought about it, studied tree rings and other records of the past and combined that with a few decades of boots-on-the-ground observations. He came up with a formula, a set of circumstances that enabled what some scientists called the worst insect outbreak in North America’s history.

Berg, 75, wrote a recent piece on the possible return of the beetles for the Kenai National Wildlife Refuge. Here is his lead sentence:

“If you lived in the woods on the Kenai Peninsula in the 1990s, you may not want to read this article.”

Spruce bark beetles did not kill all the spruce trees on the Kenai Peninsula in the 1990s. Due to what Berg termed its “peculiar ecology,” the bark beetle kills only the largest, oldest spruce. Trees smaller than six inches in diameter are spared because they produce enough pitch to suffocate mother beetles and their phloem layer is too tight for them.

Using a “mass-attack” strategy, beetles use sheer numbers to overwhelm old-growth trees like the ones in Berg’s yard. Tree by tree, the Kenai Peninsula became a graveyard of whitish spruce snags, about 30 million of them.

But the death of the old released the young spruce, suddenly enriched with more sunshine and water. In the 20 years since the worst of the outbreak, many of the survivors are now larger than six inches in diameter. Timber of that size is one ingredient in the Berg’s formula for another outbreak of the beetles, which never left the peninsula.

Another is a “run of warm summers” that favors beetle survival. Berg defined that as two or more summers in which the average May through August temperatures in Homer are at least 51 degrees F.

“The last three summers have been well above this threshold,” he wrote.

Conditions on the Kenai now seem right for another beetle outbreak. Berg does not expect it to be as large because there are not as many mature spruce as there were in the 1990s. Then, the mature trees had been around since the 1880s, the date of the last big beetle attack on the Kenai and in other areas of southern Alaska.

After studying global climate models, Berg is not optimistic about the future of spruce trees — Sitka, white and their hybrid Lutz — in southern Alaska. Models predict summer temperatures on the Kenai will continue to be ideal for beetles.

But the forest will adjust as it always seems to, Berg wrote. He expects more hardwoods on the peninsula as beetles and fires do their work, “which in turn should provide more winter browse for the Giant Kenai Moose, to borrow a term from the 1890s.”