Skip to content
Previous Next
Rocks from space in Alaska backcountry

Rocks from space in Alaska backcountry

On February 26 at 1:06 p.m., someone in northern Alaska may have seen a torch of light in the cold daytime sky.

On that afternoon, satellites detected a meteoric fireball headed toward Earth. An asteroid six feet in diameter penetrated the atmosphere at 13 miles per second, piercing the protective shell of gases at a steep angle. Arriving from the northwest, the asteroid exploded 21 miles above the ground. A spray of space rocks sizzled to Earth in a quiet part of the Brooks Range east of the Dalton Highway. 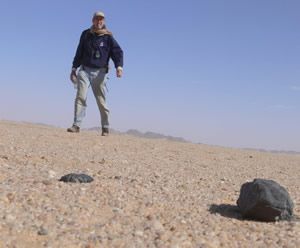 Peter Jenniskens, a meteor astronomer with the SETI (Search for Extraterrestrial Intelligence) institute in Mountain View, California, thinks this meteorite event over Alaska is a rare opportunity. He is now searching for pieces of it in the wilderness east of Chandalar Lake. Wilderness guide Garrett Jones and I are helping him.

“We don’t know if anything survived,” Jenniskens said before we began the search on foot of the possible fallout zone. “But we only need to find a small piece of it.”

Upon hearing of the asteroid, Jenniskens called Hans Nielsen, a space physicist with UAF’s Geophysical Institute. The pair had worked together before on other meteorite projects. Nielsen checked out several leads, including that of a Kotzebue musher who saw a bright light in the sky (but on a different day). He has not yet found someone who saw the fireball or heard the blast of a sonic boom.

Jenniskens compared the search for space rocks to looking for car keys in the tundra.

“You look where the searching is possible,” he said. “The area over which rocks could have fallen is many square kilometers large.”

He thinks the search is worthwhile because few of the space-detected rocks come down over land. And, by chance, Fairbanks Doppler weather radar picked up the falling rock debris.

“The radar signature is our best lead on knowing where to look,” Jenniskens said.

He has a track record, having picked up black rocks that were parts of an asteroid before they rained out over the Nubian Desert of Sudan in 2008. His recovery of several stones with students from the University of Khartoum was the only time researchers have picked up pieces of an impacting asteroid detected before it hit Earth.

The Alaska meteorite was first seen by the satellites that orbit Earth monitoring for nuclear weapon explosions. Infrasound networks at the UAF Geophysical Institute in Fairbanks and also in Dillingham picked up the low-frequency sound waves from the explosion.

From the prevailing winds, Jenniskens calculated the possible impact spots of softball to pebble-size meteorites that may have landed on the frozen ground. He is now walking the possible impact area with Jones and me. We are looking for rocks that have a thin dark layer of fusion crust, where the rock melted while passing through the atmosphere. I’ll report on what we find or don’t find in next week’s column.

If we find rock fragments from space, Jenniskens will not touching them by hand, instead wrapping them in aluminum foil. In past projects, he assembled a consortium of researchers to study them. Knowing the trajectory of the meteorite and backtracking it to when it was in space will help him determine from which debris field in the asteroid belt they might have originated.

“This is one more step to learn what type of space rock comes in on a given trajectory,” he said, “so we are better prepared when the next Chelyabinsk-like asteroid is about to hit.”