If the world continues to get warmer, vast amounts of methane gas trapped under the sea could belch up and worsen climate change, according to a study.

“We may have less time than we think to do something (about the prospect of global warming),” Dr. Ira Leifer, a marine scientist at University of California Santa Barbara, said in an interview. 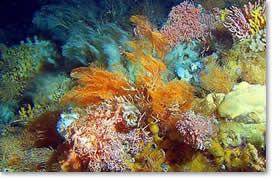 Leifer is the main author of a study that looks at how “peak blowouts” of undersea formations called methane hydrates could release the potent greenhouse gas into the atmosphere. The study was published Thursday in Global Biogeochemical Cycles, a climate science publication.

The distribution of methane hydrates throughout the world is so vast that energy companies hope one day to tap the resource. The U.S. Department of Energy estimates that such formations could harbor as much as 200,000 trillion cubic feet of natural gas.

Hydrate formations exist under hundreds of meters of water in places like the Gulf of Mexico and closer to the surface in frozen areas of the Arctic.

Methane, the main component of the fossil fuel natural gas, has two faces. When burned it releases less carbon dioxide, the main greenhouse gas that scientists believe are warming the earth, than any other fossil fuel.

But if it escapes to the atmosphere without being burned, it can trap heat rapidly because it is a greenhouse gas at least 20 times stronger than carbon dioxide.

The study measured the amount of methane that escaped to the atmosphere from a peak blowout from small volcanoes on the ocean floor off of California. It found that virtually all of the methane escaping from the deep water reached the atmosphere, countering some theories that methane seeps out in tiny bubbles that harmlessly dissolve in the ocean.

Most scientists believe emissions of heat-trapping gases from cars, industrial sources and the burning of forests are warming the earth. NASA has said that 2005 was the warmest year at the earth’s surface since records began in the 1860s.

While deep ocean temperatures have been more stable, currents of gradually rising sea-surface temperatures could eventually warm the ocean’s depths and release gas, said Leifer. “If you expose a hydrate to water that’s warmer than normal it starts destabilizing,” he said.

“I have no doubt that if we warm the atmosphere too much the oceans will follow and will cause the problem to become severe at some point.”