Mastodons long gone from the north

[fusion_dropcap]A[/fusion_dropcap] long, long time ago, a hairy elephant stomped the northland, wrecking trees and shrubs as it swallowed twigs, leaves and bark. These mastodons left a few scattered teeth and bones in Alaska and the Yukon, reminders of an immense mammal that lived as far south as Honduras. A recent look at far-north mastodons shows the creatures vanished from the Arctic thousands of years earlier than researchers thought.

New carbon dates of mastodon fossils confirmed the doubts of Grant Zazula and others who study vanished landscapes of the north. Zazula is with the Yukon Palaeontology Program in Whitehorse. Co-authors on the recent mastodon paper are Alaskans Patrick Druckenmiller, Pam Groves, Dan Mann and Michael Kunz.

Zazula got interested in what he thought were way-too-recent dates on mastodon bones when Earl Bennett of Whitehorse donated a partial mastodon skeleton in 2007. Miners had found it in the early 1970s when a gold dredge clunked into it on a Yukon creek. 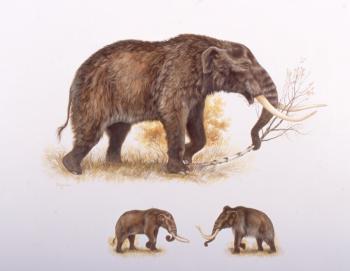 Zazula doubted earlier reported dates on mastodon teeth found in a northern Alaska river and in northern Yukon that suggested the animals lived here when no forest existed. That did not mesh with what researchers think the mastodon was. Mastodons had pointy teeth that belonged in a wood chipper. Twigs, cones and leaves were in fossilized stomach and manure remnants found farther south.

Researchers at the University of Oxford and the University of California radiocarbon dated 36 teeth and bones for the new mastodon study. They tested the protein collagen within the samples, avoiding varnish and glues applied by museum workers that may have contaminated the results before.

Using newer techniques of radiocarbon dating, researchers found the mastodon bones and teeth were all older than 50,000 years old. That means mastodons probably lived in northern Alaska and Yukon during a brief time when temperatures were as warm as they are today. Mastodons endured farther south until about 10,000 years ago. Researchers know this from bones found in northern Indiana.

Mastodons differ from woolly mammoths — which hung around much longer in Alaska and Yukon — in their appearance and what they ate. Mastodons looked like elephants with fur coats. Their tusks were straighter than mammoths and their ears were smaller. They had fierce-looking conical teeth used to strip and crush twigs, leaves and stems. Mammoths had flat teeth and grazed on grasses and forbs that were a feature of northern Alaska and Yukon during colder parts of the ice ages.

Researchers think mastodons crossed the land bridge from Asia several millions of years ago, while mammoths showed up in North America much more recently. Mammoth bones and tusks are much more common on the Alaska landscape today.

At the return of the last ice age, when glaciers began covering North America around 75,000 years ago, colder temperatures pushed the boreal forest and muskeg southward. Mastodons moved with the forest and ended up south of the ice sheets. According to the fossils left behind, Jefferson’s ground sloths and giant beavers went with them.

And they never came back. After the last ice age, the boreal forest reestablished itself in a corridor through Canada and back to the far north. Mastodons could have followed the food back to Alaska and the Yukon. But for some reason, they never did. For millions of years the hulking beasts followed sweet trees and shrubs across North America as ice sheets grew and melted. What was different about the last big melt, the one that killed off the mastodons for good?