Alaska Blackfish In A World Of Its Own

[fusion_dropcap]I[/fusion_dropcap]magine a shallow lake north of Hughes, in the cold heart of Alaska. In frigid, sluggish water, dim blue light penetrates two feet of ice. The ice has a quarter-size hole, maintained by a stream of methane bubbles. Every few minutes, a brutish little fish swims up, sips air, and peels back to the dank. 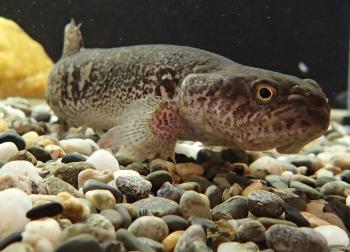 An Alaska blackfish in an aquarium at the office of the Alaska Department of Fish and Game in Fairbanks.
Photo by Ned Rozell.

The Alaska blackfish is an evolutionary loner that fins through lakes and tundra ponds across much of the state. It exists nowhere else, except just across Bering Strait in Siberia. Not much larger than a banana, the fish is different from others in the state because in addition to gathering oxygen through its gills, it can pull it from free air.

Though many fish have the ability to breathe air, most of them live in the tropics. The Alaska blackfish’s ability to gulp the same air as you and me has allowed it to occupy stagnant northern pools that kill other fish. When ice seals off small lakes and the stocked rainbow trout goes belly up, the blackfish guts it out.

Just how tough is the blackfish? An enduring rural legend is of a blackfish being chipped from a frozen mass of its brethren and fed to a sled dog. The fish thaws and revives in the dog’s stomach, where its wriggling causes the dog to vomit. There on the snow, a live fish writhes, resurrected. This story has persisted at least since Lucien Turner, writing about Alaska natural history in 1886, first documented it.

Per Scholander was skeptical about Turner’s “colorful” report. Scholander was a physiologist interested in how creatures and plants survive extreme cold. Along with Laurence Irving, who later founded UAF’s Institute of Arctic Biology, Scholander traveled to Barrow in 1948 to study plants and animals. In their journal writeup of that work, they devoted the final chapter to “Experiments on Freezing the Blackfish.”

From Barrow lakes, the scientists captured eight blackfish and froze them into a block of ice. When they thawed the fish, none were alive.

“However,” Scholander wrote, “the blackfish, like man and other animals, can survive being partially frozen.”

To see how much blackfish could take, the men subjected them to more tests. They conducted these experiments by dipping parts of the fish in Prestone antifreeze chilled to subzero. Two fish frozen from their tails to pectoral fins thawed and survived for five days before they died. The researchers noted the fish swam using only fins that had not been dipped and that blood circulation never resumed in the frozen parts.

They then dunked the heads of five fish. The men were impressed with the result after thawing: “The fish swam around the next day, in spite of a circulationless dead head.” But all died within three days.

The physiologists concluded that the blackfish, though quite impressive, does not recover from the freezing of its tissues and cannot survive becoming a fish-sicle.

“Our observations have in no sense defamed the blackfish,” Scholander concluded more than 60 years ago. “Every winter they are still being thrown hard frozen to the ravenous dogs of the Yukon and Kuskokwim valleys . . . Indeed a fortunate observer may still see the dogs throw up the fish alive, provided only that the fish were not too hard frozen.”