The Fur Rendezvous, “Fur Rondy” to locals, is Anchorage’s only winter festival, and provides an opportunity for trappers and buyers to meet every year. It is also the largest winter festival in North America. Ever been chased by a reindeer? Ever played softball wearing snowshoes? How about bowling on an ice-covered river? Ever run through a metropolitan city in costume on snow-covered streets? During the Fur Rendezvous festival, the streets of downtown Anchorage will become a winter spectacle for all to enjoy. There are numerous activities and events such as Ice Sculpture displays, sled dog weight pulling, Eskimo Blanket Toss, Snowshoe Softball, carnival rides, Grand Prix, and the World Championship Sled Dog Race.

FurRondy has also created a frenzy among collectors. If you’re a pin collector, you definitely know what we’re talking about. Fur Rondy Pins are extremely popular with collectors, and you can find many of them listed on the popular auction web site, Ebay, on any given day. Some pins have been listed at over $1000 on E-bay. You can also find pins from past festivals at Fur Rondy every year.

Since its early days, Fur Rendezvous officials have worked to be “Alaska’s Premier Winter Festival,” adding a variety of activities and events annually. Today, visitors can watch the World Championship Sled Dog Race or ride in a dogsled themselves, take part in a fur auction, try the Eskimo Blanket Toss or cross country ski in the Torchlight Ski Parade – the list is endless. Nightlife is equally as varied, from the formal Fur Rondy Masque Ball to the Jim Beam Jam and everything in between. 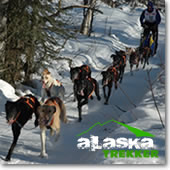 The Fur Rendezvous began as a winter sports tournament (hockey and basketball). Some history books state that Fur Rondy began in 1936, other sources place it beginning as late as 1939.
The year in which the idea was conceived is now accepted as the beginning date of the festival: 1935. It was during that time that Vern Johnson, Clyde Conover, Thomas Bevers and Dale Bowen came up with the idea of a party that would encompass all of Anchorage.

The main focus of the Fur Rendezvous carnival was to bring people together, to show community support and celebrate the beginning of the end of winter. In those days revelers purchased a $2 ticket that gained them admission to all of the activities. Because fur trading was the second leading industry in Alaska at the time, fur trading became an important part of the festival. It provided a golden opportunity for trappers and buyers to meet in Anchorage to ply their trade and cut out the middle-man. Trapping contests were held, and prizes were awarded for the longest fox, the best fox and the finest ermine pelts.

The Fur Rondy festival continued to grow and in 1956 Greater Anchorage, Inc. was formed to take over the management and operation of the festival. GAI is governed by a board of directors and has a full-time year round staff. Today the Anchorage Fur Rendezvous is one of the largest winter festivals in North America with estimates of over 67% of the population participating in Rondy.

Rondy Grand Prix – The Oldest Street Race in the U.S.
Official Fur Rondy Fur Auction – the descendant of the original fur trade rendezvous, present since the earliest days.
Miners’ and Trappers’ Charity Ball and Mr. Fur Face beard contest (since 1950) – Beards are grown as long as possible and they are dyed, decorated and shaped for this contest.
World Championship Sled Dog Race (since 1946, with a women’s race since 1953) – This three-day, 75-mile sled dog race brings mushers from across Alaska and the world. However, it is often canceled in recent years due to warm weather, with the most recent cancellation being in 2006.
World Championship Dog Weight Pull (since 1967) – sled dogs attempt to pull the greatest weight
Miss Fur Rendezvous pageant (from at least late 1950s through mid 1970s), also called Miss Fur Rondy
Snow Sculpture Competition
Fur Rondy Carnival
Frostbite Footrace – Costumed competitors run through downtown Anchorage
Rondy Grand Parade
Running of the Reindeer began 2008.
Rondy on Ice – figure skating show
World Ice Bowling Championships

Running of the Reindeer video:

Anchorage is located in the Southcentral region of Alaska, 358 miles south of Fairbanks, 40 miles north of Girdwood and 127 miles north of Seward. It is a three-hour flight from Seattle.

Anchorage is centrally located in Alaska with more than 280 flights serviced daily by domestic and international airlines. Anchorage can be reached from anywhere in North America via the Alaska Highway. The Glenn and Seward highways lead into Anchorage and the Alaska Railroad travels between Anchorage from Fairbanks, Whittier and Seward.

Anchorage has more than 10,400 hotel/motel rooms and more than 850 bed and breakfast/hostel beds. There are more than 600 restaurants/eateries.