A few times each week, someone carries something dead or alive through the doors of the UA Museum of the North, hoping an expert can identify it.

A couple weeks ago, a woman arrived with a small jar of what appeared to be white worms. People at the museum’s front desk called Derek Sikes up from his office.

Sikes is an insect specialist. He has travelled from the Aleutians to the Arctic to Southeast to find them. Worms are not insects, but Sikes takes a look at earthworms and other semi-exotic Alaska creatures people bring in because he is the closest thing to a worm person at the museum. 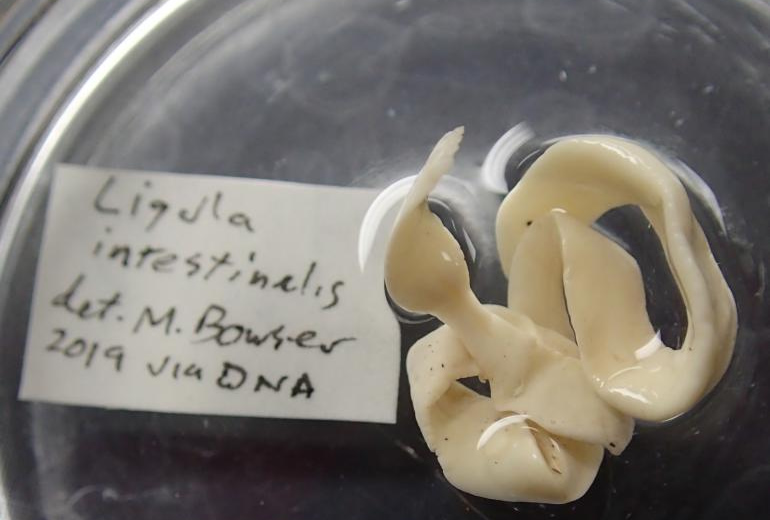 “I think these are flatworms,” she said to Sikes.

Pflughoeft then showed Sikes a photo on her phone showing the creatures in a fresher state, where she found them on the forest floor. They resembled pad Thai rice noodles. For all his crawling on the floor of Alaska, Sikes was stumped, and intrigued.

“This was something from the X-Files,” he said.

Organisms not yet documented still exist on planet Earth, and Sikes has found a few, but he also knows how rare that kind of discovery is.

For an answer, he asked the masses, posting Pflughoeft’s photos on Facebook. Many of his friends on that platform are also experts on small living things. They suggested ideas, including that it was a parasite, but there was no consensus.

Sikes sent the photos to Don Larson, who just defended his UAF Ph.D. research on parasites that live within wood frogs. Larson’s first thought was tapeworm, but from the photos he could not see the segmented bodies tapeworms have.

“It looked like a snotball,” Larson said. “When I have no idea what something is, I think that maybe it’s a slime mold.”

Sikes also suspected the organism might be a slime mold, a term for yucky, gelatinous bodies that scientists once lumped in with fungi but now are residents of the kingdom Protista. But a mycologist familiar with slime molds said the creature looked nothing like any slime mold he had ever seen.

After posting the white ribbons on the website iNaturalist.org, Sikes read some interesting responses but nothing rock solid. He also suspected it might be a parasite because it was white, the color of organisms that live in worlds with no light, like deep in caves or inside other animals.

Sikes then used another tool he keeps around, an animal DNA identification kit that is available for about $40 from Lifescanner.net. He sent two samples of the white worms to a lab operated by the company. In a few weeks, he got a response from the company: Cynthia Pflughoeft had found tapeworms.

Fish tapeworms to be exact. Sikes’ colleague Matt Bowser checked a larger DNA database and narrowed the identification to the species Ligula intestinalis. More digging brought up a single Alaska reference, by a researcher who had found Ligula intestinalis in an Alaska rainbow trout in 1957. One X-Files case closed.

How did the tapeworms get to the forest floor, not far from a power-plant cooling pond? That remains a mystery, but this parasite, like the frog parasite Don Larson studied, needs three other life forms to survive. Ligula intestinalis is a tapeworm that lives in the guts of fish and fish-eating birds. The third animal it lives within is a copepod, a tiny crustacean that fish eat.

It’s possible that a bird, maybe an osprey or gull, ate a fish with these tapeworms (which may have been swimming erratically because of them). The worms could have somehow exited the fish before the bird ate the fish. Or the worms could have come from inside the bird itself.

Though people like Cynthia Pflughoeft are fascinated by parasites, most of us cringe at the mention of them. But researchers that study parasites will tell you that ecosystems with parasites are healthier than those without. When there are no parasites, or very few parasites, then an animal they rely upon must be missing from the landscape.