There’s a new kind of dinosaur out there, and it lived in Alaska.

Its bones, long turned to stone, are part of a cliff in northern Alaska. That’s where dinosaur-hunter Tony Fiorillo brushed dirt away from a portion of its massive skull – something that most of us would mistake for a rock. 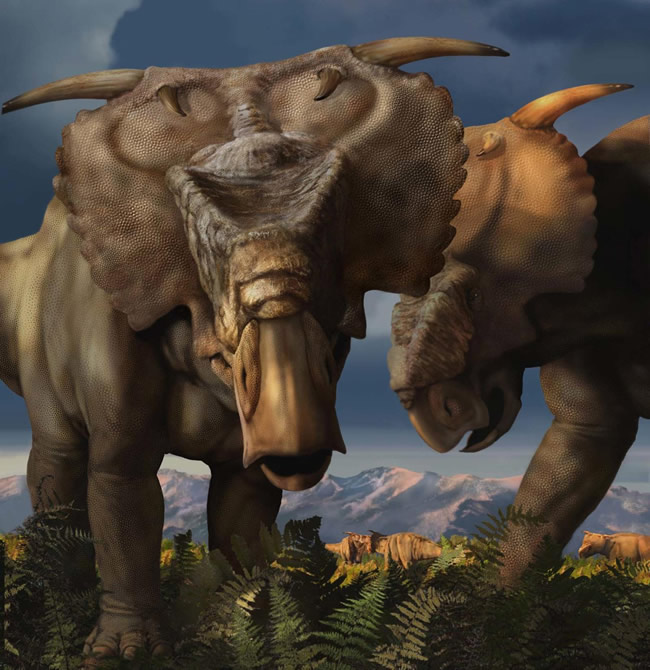 The year was 2006. It was August and summer had fled the Colville River, if it had been there at all. Fiorillo, who visits Alaska each summer from Dallas, where he works at the Museum of Nature & Science, remembers climbing from his tent with a heavy head every morning. He later learned he was working with pneumonia.

On one wet, miserable day, Fiorillo was clinging to a hillside above the river, spading the soil gently with a trowel. Noticing an unusual lump, he picked up a brush to gently whisk the dirt away. Suddenly, an entire skull came into focus, and he felt a warm flush of discovery.

“When I had that moment of recognition, only (a large nasal bone) was exposed,” Fiorillo said. “But in my mind I could see the rest of the skull.”

Fiorillo was excited because he could tell the specimen was one of the rare ones intact enough to be displayed in a museum, and the Museum of Nature & Science in Dallas was then planning a new building. As he and his digging partners, including Paul McCarthy of the Geophysical Institute and the University of Alaska Fairbanks Geology and Geophysics Department, unearthed the skull and coated it in plaster for a helicopter ride out, Fiorillo didn’t know they had found a species unknown to science.

The dinosaur, which lived in northern Alaska about 70 million years ago, is a plant eater with a massive shielded head that looked something like a Triceratops, only without a horn extending from its nose. Its mouth resembled a giant parrot’s beak.

“This animal had a face only a mother could love,” Fiorillo said.

Fiorillo and others have named the dinosaur Pachyrhinosaurus perotorum in honor of the family of former presidential candidate H. Ross Perot. In 2008, Perot’s children donated $50 million to the Dallas Museum of Nature & Science.

The dinosaur is similar to two other thick-nosed species paleontologists have found, one in southern Canada and one in northern Alberta. But the Alaska version has subtle differences and is the youngest of the three by a few million years.

Back when the horned plant-eater lived, the climate on Alaska’s North Slope fell somewhere between Portland, Oregon and Calgary, Alberta. The ground it stood upon was much closer to the North Pole then, and creatures that lived there experienced great extremes of light and dark. Also living on the prehistoric coastal plain were three other plant eaters and four meat eaters, some with huge eyes for hunting during the dark season. Bones from all the dinosaurs are at the same rich site on a high bend of the Colville River.

Fiorillo and others didn’t know they had a new dinosaur for five years because it took that long to sort out all the dinosaur bones from a hunk of rock that flew by helicopter sling from the Colville River to a small airstrip, where a pilot flew it to Fairbanks. From there, it traveled down the Alaska Highway and all the way to Texas by truck. In Dallas, fossil-preparer Ron Tykoski began the long task of chipping and carving apart the rock. He found the remains of many dinosaurs.

“It’s as if someone took 15 Pachyrhinosaurs, dumped them into a blender for 30 seconds, poured all the mess out into a ball of concrete, then let it solidify for 70 million years,” Tykoski said.

When he finished, the two paleontologists saw that several features on the skull were different enough from similar dinosaurs that no one had documented it until now. Fiorillo and Tykoski just unveiled the evidence for Pachyrhinosaurus perotorum at a paleontologist’s meeting in Las Vegas, reintroducing to the world an arctic dinosaur that once stomped through the ferns and forests of northern Alaska.