From a NOAA Press release:

NOAA Fisheries marine mammal entanglement experts are hopeful that a humpback whale is free, after a successful operation to cut the anchor line it was stuck in Sunday afternoon near the mouth of Tracy Arm.

The humpback had become entangled in the anchor line of the cruise vessel Wilderness Explorer early Sunday morning.

During the night, numerous humpback whales had been bubble-net feeding in the vicinity of the vessel, anchored in Holkham Bay near Wood Spit. One of these animals struck the vessel at 2:15 a.m. and became entangled in the anchor line. According to the bridge team, the chain was wrapped around a pectoral fin, and as the whale turned, became wrapped around the head and jaw. 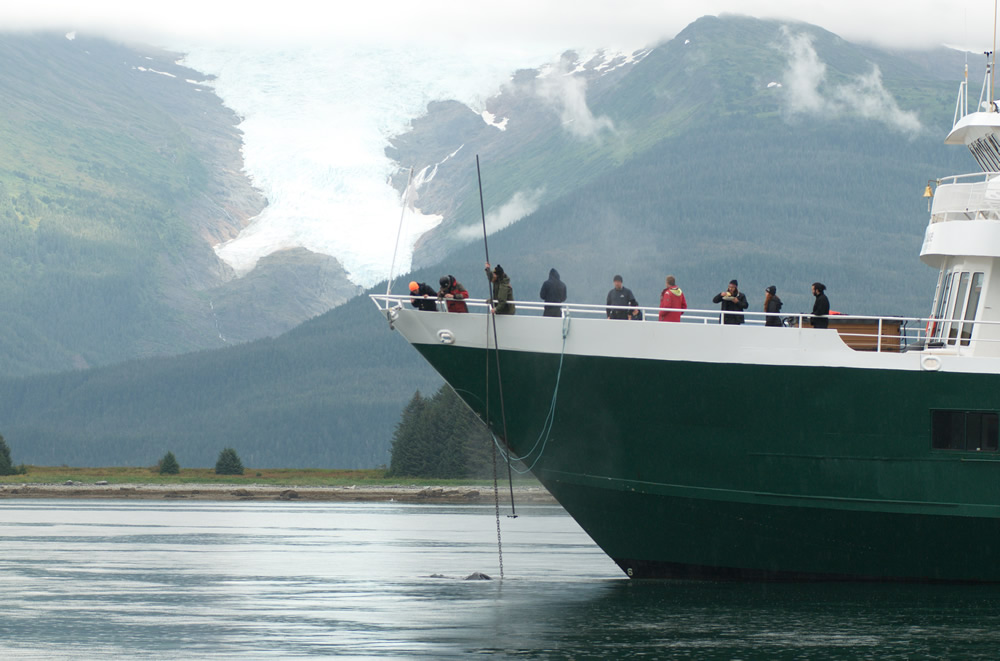 NOAA Fisheries/John Moran NOAA MHSRP permit 18786-01 NOAA-trained marine mammal responders collect a sample from the exhalation of an entangled a humpback whale on Sunday, August 27, near the mouth of Tracy Arm, Alaska.

NOAA Fisheries was notified of the entanglement just before 3 a.m. In the early hours of the morning, agency authorities reached out to Alaska’s Large Whale Entanglement Response Network for help. The network consists of NOAA authorized specialists who are trained to respond to such high-risk events. Humpback whale researcher Fred Sharpe of the Alaska Whale Foundation quickly mobilized his vessel from Baranof Warm Springs, and had his team on scene by late morning.

Using a camera on the end of a long pole, the team assessed the entanglement and determined the anchor chain was wrapped around the lower jaw with only a half twist and 50 feet of chain between the animal and the vessel. While consulting with NOAA Large Whale Entanglement expert Ed Lyman by phone, and working with the crew of Wilderness Explorer, the team decided the best plan of action that would ensure safety of the responders, yet have a good chance of freeing the whale, was to make a clean cut of the chain at the vessel and hope the whale could navigate the remaining half twist to free itself of the 50 feet or less of chain.

Shortly after 2 p.m., the cut was made. The animal remained at the surface initially before submerging. Soon after a humpback believed to be the once-entangled whale was seen swimming rapidly away. They believe the whale was able to free itself. It was sighted swimming away at about a quarter mile and again at half a mile from the vessel, and was not resighted after that. The team stayed on the scene for more than an hour after the effort, but did not re-locate the whale.

The tour vessel proceeded to Petersburg to get a new anchor and chain. A salvage crew will return to the site to recover the anchor.

“We are grateful to the crew of the Wilderness Explorer for reporting the entanglement quickly, and to the Alaska Whale Foundation for a professional response,” said NOAA Fisheries Regional Administrator Jim Balsiger. The vessel crew did everything right by immediately notifying the NOAA Fisheries Alaska Marine Mammal Stranding and Entanglement Hotline and the U.S. Coast Guard, assessing the situation, remaining calm, and not attempting to intervene to free the whale. Instead they waited until the trained whale response team to arrive. Trying to free an entangled whale can be extremely dangerous for humans as well as the whale.

NOAA Fisheries works with authorized and trained network partners under the National Marine Mammal Health and Stranding Program to attempt to safely free large whales from life-threatening entanglements, while at the same time, gather valuable information that may reduce the frequency and impact of entanglement in the future..