[fusion_dropcap]S[/fusion_dropcap]kiing to work over a persistent spring snowpack, I looked up to see a large white bird flapping gracefully over the spruce tops. A few gentle honks confirmed it was a tundra swan.

After a long winter when all the large birds were black, it was good to see one of the frontrunners of the billions now winging to Alaska.

Tundra swans can live to be older than 20. Perhaps this bird, about 15 pounds with a wingspan of almost six feet, had passed over the lowlands north of UAF many times. The swan was probably headed to northwest Alaska or the Yukon-Kuskokwim delta. 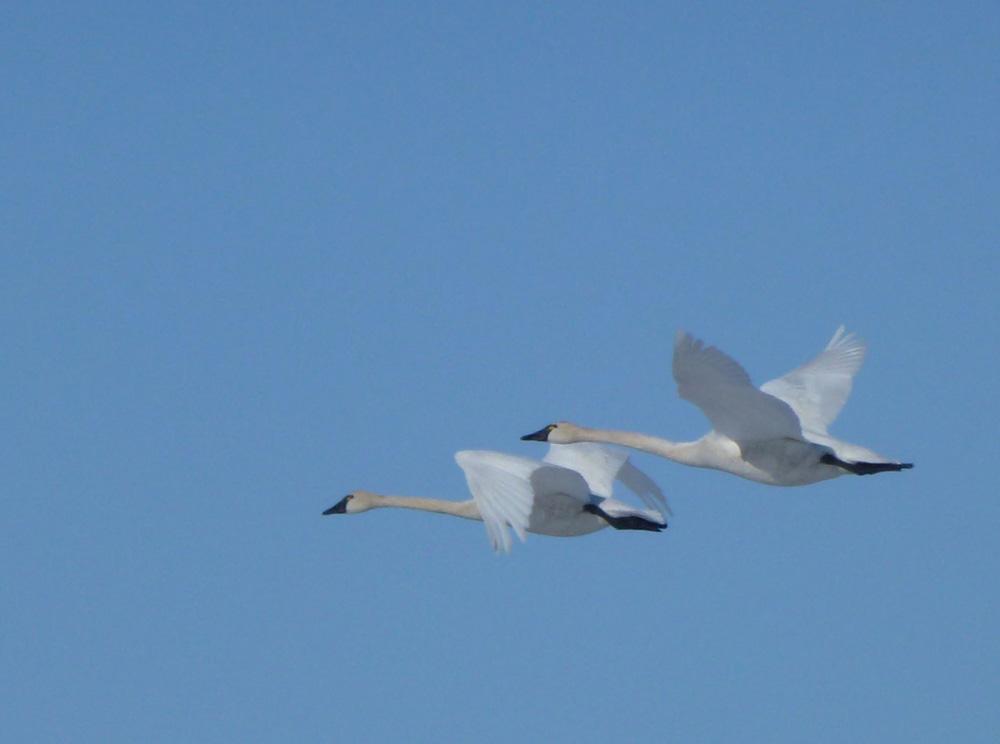 That’s according to a biologist who was part of a team that captured and released more than 500 tundra swans in 2007 and 2008. The birds were temporarily flightless as they shed old feathers and grew new ones in their favorite Alaska breeding areas: Cold Bay, King Salmon, the Yukon and Kuskokwim river deltas, Kotzebue Sound and the Colville River delta.

Craig Ely of the USGS Science Center in Anchorage handled many of those swans and helped to implant satellite transmitters in the abdomens of 50 birds. Those transmitters lasted for a few years, enabling scientists to confirm a split in Alaska tundra swan populations.

Swans that spend their summers in tundra lakes north of the Brooks Range are East Coast birds in the winter, settling in Maryland, Virginia and North Carolina.

Swans that breed south of the Brooks Range in the wetlands of western Alaska are West Coast birds in the winter, feeding in farm fields of Washington, Oregon and the central valley of California.

Though the East Coast and West Coast swans migrate wingtip to wingtip and pause in similar barley fields and lakes in Saskatchewan, the birds almost never follow their neighbors to a new place.

“Tundra swans are extremely site faithful, so only extremely rarely would a Colville River bird end up on the West Coast,” Ely said.

Both the East and West Coast tundra swans spend the majority of their lives migrating. Based on information from the satellite trackers, the bird I saw might have left the Central Valley of California in late January. From there, it looped across Oregon and Washington, maybe northern Utah, on its way to the prairie in Canada. Then it flew over northern British Columbia and back to Alaska.

After a few weeks in wetlands of the boreal forest, the bird will be on its way to treeless tundra that will soon be thawed and rich with aquatic plants.

“All the Alaska populations of tundra swans spend more time in migration than on breeding or wintering areas,” Ely said. “They truly are birds on the move.”

Ely and other scientists think that the East-Coast-wintering birds that summer on the Colville River may be flying an ancient ice-free corridor that could have been the only unfrozen pathway north during the last Ice Age. 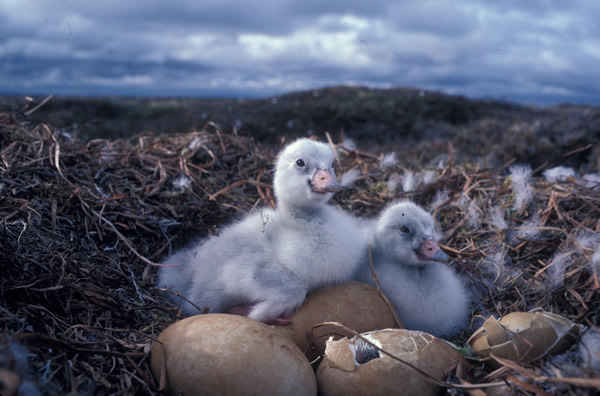 Fascinated by the unique, divergent paths of the two populations of tundra swans, Ely and others studied which group, including lower Alaska Peninsula tundra swans that don’t migrate, might have a survival advantage. They found all swans were doing well despite how far they traveled and how little time that might give them on the breeding grounds.

“The tremendous diversity of migration strategies we identify in Alaskan tundra swans, without clear impacts on survival, underscores the ability of this species to adapt to different environments and climatic regimes,” Ely wrote.