In early March up on the frozen Arctic Coastal Plain, as the wind sculpts snow into drifts, it’s hard to tell northern lakes from surrounding tundra. But lurking deep beneath that flat white world are toothy predators as long as your arm.

In pools 60 feet down, lake trout are somehow passing the long winter. A graduate student has sharpened the focus on a familiar species that lives as far south as Colorado but seems so mysterious at the top of its range. 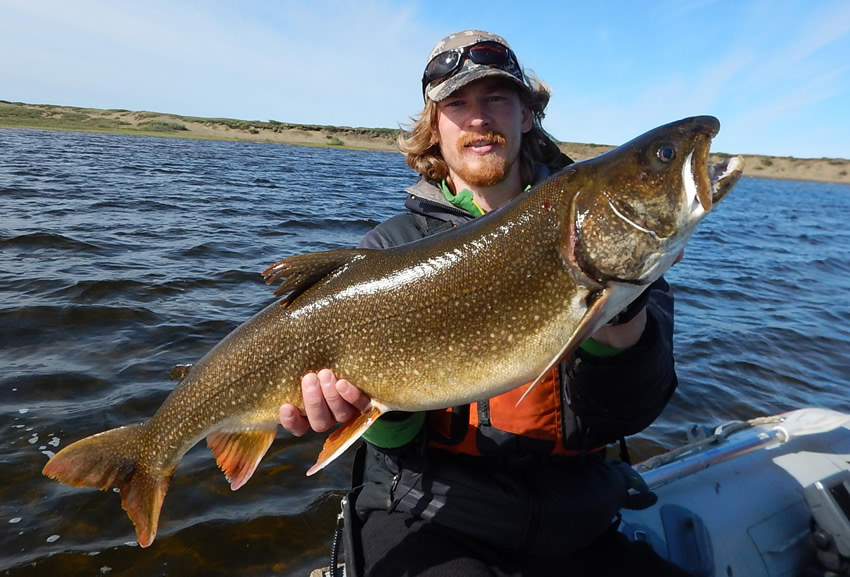 Kurt Heim shows a lake trout he caught in the Fish Creek watershed on the Arctic Coastal Plain. Photo by Lydia Smith.

Eric Torvinen spent an entire summer and part of another pursuing lake trout on Alaska’s treeless North Slope. The lack of trees, in fact, was part of the reason he wanted to study the fish for his master’s degree.

He gathered ear bones from lake trout that show growth rings. His goal was to see if he could use otoliths from the long-lived fish to show past climate trends. Thick yearly rings might indicate warmer summers with more food.

In an inflatable kayak, Torvinen floated in 2015 down Fish Creek, a Rhode Island-size watershed pocked with 4,000 lakes. He and his field partner would stop at water-filled depressions between ancient sand dunes. There, they fished for trout with a rod and reel, sometimes nets. After the float, to reach a few nearby lakes deep enough for lake trout, they contracted a helicopter pilot.

The fishing was not great. But then it was.

“We’d go 10 days without catching fish, then catch six fish in an hour,” he said.

In that summer and part of another, they caught 53 lake trout. One was longer than a meter stick. Another had been alive longer than them (the oldest fish was 55 years old. The average fish was 25).

The University of Alaska student was looking at Fish Creek because researchers who are mentoring him want to know as much as they can about the area, which is beginning to host roads and oil-drilling platforms. They also like how the entire 1,800-square-mile drainage is in the flats just south of the Arctic Ocean.

The lake trout that hang out in deep holes don’t seem to be a favorite food of the barren-ground grizzly, wolves or other large creatures. The handsome, spotted fish with forked tails are the top of the food chain in the small lakes where they may spend their whole lives.

From analyzing their otolith bones, Torvinen saw that lake trout grew well in years with warmer August temperatures. August is the only dependable ice-free month on lakes that far north.

Researchers once found lake trout in Toolik Lake ate a lot of snails, but Torvinen found the ones he caught were full of least cisco (a whitefish), and sticklebacks.

As for lake trout’s existence through a long arctic winter, Torvinen said he does not know what state of dormancy, if any, the fish are in now. But he plans to take a look. He’s traveling north in about a month to see how lake trout endure days beneath a landscape that gives no hint of their existence.