By the end of this century, Alaskans may be enjoying tropical evening breezes for about a week each year. That’s an increase from the almost zero such nights we currently savor.

But it could happen, according to a graduate student who has tightened the grids of computer models to perhaps offer a more detailed glimpse of Alaska’s future. 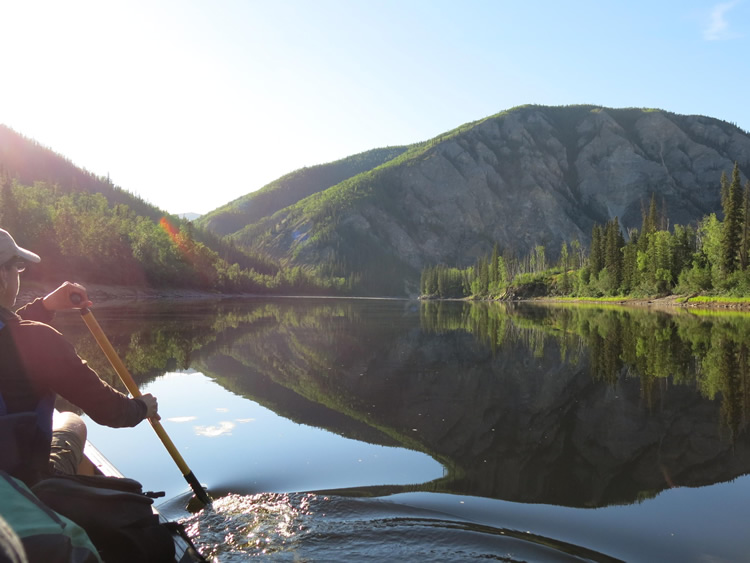 Summer nights in Alaska, like this one on the Fortymile River, may be getting warmer. Photo by Ned Rozell.

A tropical night is one with a low temperature of 68 degrees F or warmer. Right now, even the warmest places in Alaska hardly ever experience this. By the year 2100, the average number of tropical nights at some location in Alaska goes to 6.8. That’s according to a computer climate model run by Rick Lader. He is a graduate student at the International Arctic Research Center in Fairbanks.

Most global climate models predict the future of ground temperatures and other variables in 60-mile squares. Because of Alaska’s mountains and deep valleys that so affect weather and temperatures, Lader customized model results for 12-mile squares. His tweaks resulted in the ability to predict these changes for Alaska by the year 2100:

The number of days with temperatures higher than 77 degrees will triple in many places across the state.

Winters like 2015-2016, when the temperature did not fall below minus 30 in Fairbanks, will become the norm within the next 25 years.

Longer periods of rain, shorter dry spells: Consecutive days with precipitation greater than or equal to 1 millimeter will increase by 23 percent. Consecutive days of dryness will decrease 21 percent.

A longer growing season: By 2100, the annual number of days with killing frosts will decrease by two months.

At the same conference where Lader presented his results, a scientist from the University of North Carolina said that aufeis in northern Alaska is disappearing sooner each summer, and fields of it are becoming smaller and less persistent.

Aufeis is like a glacier in miniature that forms on streams in winter. A German term pronounced “off-ice” meaning “ice on top,” aufeis builds all winter as groundwater forced to the surface comes in contact with frigid air and freezes in layers.

Fields of aufeis can cover acres of the North Slope. Sometimes they endure the whole summer.

Following through on the observations of Kirk Sweetsir, pilot for Yukon Air Service and frequent observer of northern Alaska, Tamlin Pavelsky of the University of North Carolina took a look at Alaska’s aufeis fields.