Cos Jacket – A Ghost Town on the Tanana River

COS JACKET — On a canoe trip down the lower Tanana River, we’ve scrambled up a sandy bank to explore a place that is less populated now than it was a century ago.

No one, in fact, lives at Cos Jacket anymore. There is a cabin-size cache with a tin roof. A few sagging log structures sit on a ledge overhanging the Tanana. One of the cabins has lost its door and front wall to the river. Its fallen ridgepole points like a finger over the Tanana. 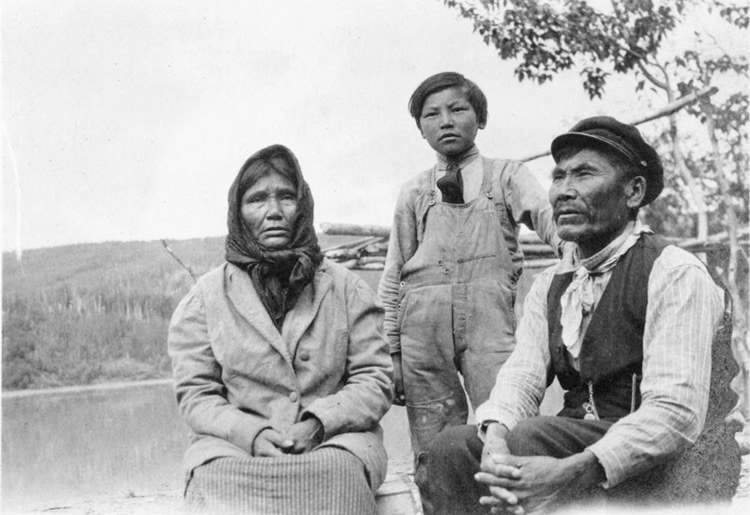 Chief Ivan of Coschaket is shown at right in this photo from the Drane Family Collection in the UAF Archives. The woman and boy were not identified in the photo, which was taken sometime between 1913 and 1939. UAF Archives Photo.

With no noise except the whisper of breeze through poplar leaves, Cos Jacket has the Alaska ghost town feel. Across the state, there are dozens of similar places. Some, like Kokrines, Birches, Kallands and Grant Creek, are not far from Cos Jacket, which is about a half mile downstream from where the Cosna River dumps iced-tea water into the Tanana.

In a brief tour of Cos Jacket hastened by terrific mosquito density, Alison Beamer, Jason Clark and I notice the following: treeless areas that may have been gardens, a wooden barrel sealed with tar that probably arrived by steam ship and a nice iron cookstove under a collapsed roof. Jason points out a sign for a survey point on a tree, probably placed by an archeologist who mapped Cos Jacket.

USGS maps show the name Cos Jacket, but my GPS display reads “Coskakat.” In the Dictionary of Alaska Place Names, Donald Orth wrote this place was also known as Cos-chaget (mouth of the Cos River), Coshaget, Cosna, Consa, Koskaket and Cross Jacket. The last version is what a woman from the downriver village of Tanana used when I asked her about the site.

Not much written history exists regarding Cos Jacket. U.S. Army Lt. Henry Allen did not mention or map a village when he passed by on his summer expedition in 1885.

The first record of Cos Jacket in print may be in a story from the Chicago Tribune of April 15, 1901. A reporter wrote of Army Lt. Joseph Herron’s exploration with five other men from Cook Inlet to the Yukon River. Working for the War Department, Herron was looking for a feasible all-American route to the Yukon, one where U.S. stampeders could avoid Chilkoot Pass and paying taxes on a passage through Canada.

On December 9, 1899, after walking almost 1,000 zigzag miles from the mudflats across from Anchorage, Herron and his comrades saw the first people they encountered in weeks.

“It was only when they found a band of Indians camped at Coschaget on the Tanana that such luxuries as bread, butter and tea passed their lips,” the Tribune reporter wrote.

After Gold Rush prospectors had spilled into Alaska (though not by Herron’s difficult route), Matthew Sniffen and Dr. Thomas Carrington in 1914 visited the site of Cos Jacket. In a large canoe with gasoline-powered motor, the pair traveled from Eagle to Tanana to St. Michael on a mission they kept secret. At the junction of the Yukon and Tanana, they put their boat on a steamship and headed to Fairbanks. They then floated back down the Tanana River.

Posing as adventurous tourists during their trip, Sniffen and Carrington were working for an organization called the Indian Rights Association. They went undercover “in order that we might see conditions as they were, and especially observe the attitude of the whites toward the Indians.”

In the detailed report, “The Indians of the Yukon and Tanana valleys, Alaska,” Sniffen wrote in 1914:

“Cross Jacket is a new settlement. Many Indians are leaving Tanana for this site, and they are building a better grade of cabins.”

The cabins remaining at Cos Jacket show some extra effort, with spruce logs hewn flat on the interiors and log ends neatly squared where they join together.

In one of these cabins lived Chief Ivan, who traveled to Fairbanks in July 1915 for the Tanana Chiefs Conference. There, a dozen Native leaders from the Interior met with officials from the Bureau of Indian Affairs and other federal agencies. One of the main topics was the encroachment of white miners and camp followers who were hunting, fishing and trapping on land the Natives depended upon for generations.

Chief Ivan of Crossjacket, then a settlement of 15 families used mostly in winter, rejected the idea of Natives being granted homesteads or reservations.

“We don’t want to go on a reservation, but wish to stay perfectly free just as we are now,” Chief Ivan said at the conference. None of the other chiefs wanted reservations, either, and none were formed. Neither were homesteads granted.

U.S. Census Bureau workers counted 46 people at Cos Jacket in 1929 and 38 a decade later. The town doesn’t appear on census registers after 1939.

Like other Alaska places that once were, Cos Jacket is now an intriguing place name on the map, slowly being reclaimed by trees and river and deep quiet.