Fire breaks down and builds up Alaska boreal forest

I once wrote about how fire had ravaged more than 10 percent of Interior Alaska during two smoky summers. A wildlife biologist called me out for choosing an inadequate verb. Tom Paragi chooses words that are more positive when he looks at a burned forest.

Paragi works with the Alaska Department of Fish and Game in Fairbanks. His specialty is the ecology of disturbances to the boreal forest, among them logging and the effects of wildland fires. I told him “ravaged” came to mind when I walked through a burned spruce forest and saw the charred bones of red squirrels. He said that red squirrels have the unfortunate tendency to seek shelter in spruce trees when something threatens them. Other small mammals, such as voles on the forest floor, might survive a fire because the soil around them is wet enough not to burn. Larger animals move fast enough to escape slow-moving wildfires typical of the boreal forest, he said.

“I’ve seen pictures of deer and elk being caught in fires down south, but I’ve never heard of anyone seeing a moose getting killed by fire,” he said. “In most cases, wildlife has a chance to move on.” 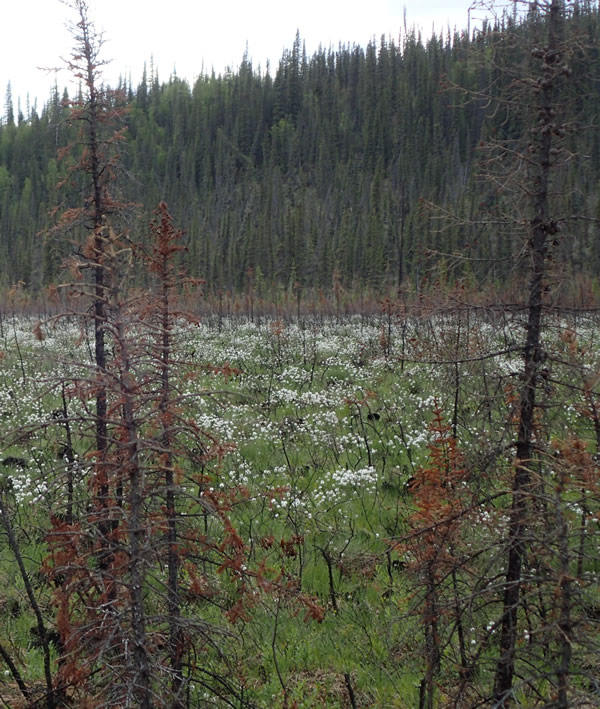 Cottongrass springs up on the site of a 2015 wildfire on Birch Creek in Interior Alaska. Photo by Ned Rozell.

Even if voles and red squirrels die in a large hot fire, their relatives fill the empty niche in the months following. The greenery that pops up after a fire is often a better home for small animals than spruce trees over moss over permafrost, Paragi said.

“The net effect of fire (on most animal numbers) is a positive,” Paragi said.

The reported areas of Alaska fires can be misleading, too, Paragi said. When the Alaska Fire Service reports the maximum perimeter of a large fire, about two-thirds of the area inside that perimeter usually burns, he said.

Paragi has flown over parts of Alaska after big fires and has seen a patchwork of muskeg, mature forest, and neon bright greens sprouting from blackened areas.

“You have this tremendous mosaic out there,” he said.

Paragi said large acreage burned in Alaska has partly been the result of overzealous firefighting in the past combined with recent warm and dry conditions. Until the late 1980s, Alaska policy was “immediate suppression of all wildfires,” according to the Alaska Interagency Wildland Fire Management Plan.

That strategy preserved black spruce, the final stage of the boreal forest in many areas of the Interior. Black spruce waits out other tree species, pops up in the understory, grows slowly, and stays anchored in cool soil unless the forest burns, is cut down, gets chewed up by river ice or meets some other fate. The resilient black spruce is the most flammable tree in the boreal forest.

“If you keep putting out all the fires, there’s no breaking up of these large expanses of spruce,” Paragi said. “Fires can get dangerously big really fast.”

Biologists like Paragi team with state fire managers to stage controlled burns to break up large patches of spruce and to stimulate new growth favored by moose, grouse, and other animals.

“Generally, fire is a positive thing for the nutrient cycling of the boreal forest,” he said. “After a June fire, I’ve seen waist-high willow sprouts by fall. We’ve also burned aspen in May and had sprouts well over my head by hunting season.”