CIRCLE — As the pilot of a chartered Cessna 206 curved in for a landing above the Yukon River, his passengers squinted at white river ice that clung to the south bank near town. Chocolate brown open water filled river channels both upstream and downstream of the ice.

In the seat behind the pilot, Ed Plumb of the National Weather Service scribbled in a notebook. Kerry Seifert of Alaska’s Division of Homeland Security and Emergency Management looked downriver, toward an S-curve notorious for catching ice. Pilot Dave Lorring, who has flown these ice-observing flights for more than a decade, summed up their thoughts.

“I’ve never seen it this broken up before at this time of year,” he said over the intercom. 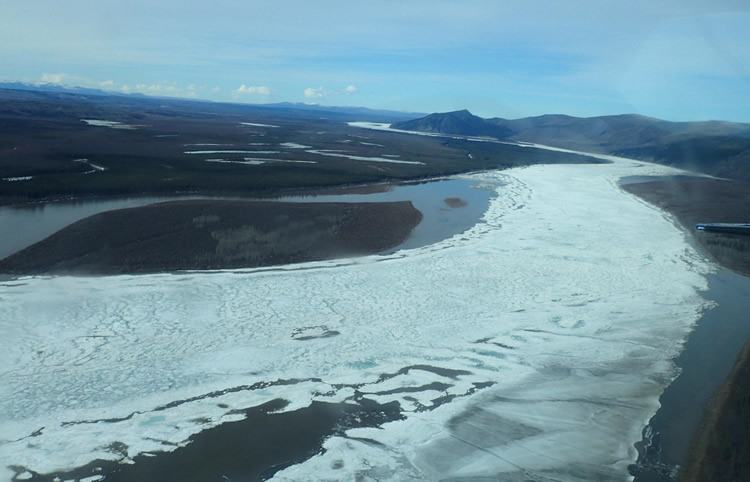 A sheet of river ice between Eagle and Circle. Photos by Ned Rozell.

Two days before the end of April, the men were flying over the big river as part of River Watch, a mission funded by the state and flown each year for the last few decades. A hydrologist and emergency manager fly the river each day in spring when ice could pose a threat.

This year, in a thermal breakup, warm spring temperatures have weakened the ice.

“This is just a really bizarre year,” Seifert said as he stepped from the plane. “It’s like a backwards breakup this year (with open water downriver of ice sheets).”

Circle, the town at the end of a gravel road that terminates at the Yukon River, has been under water a few times. A metal support post in the store has five labels stuck at floodwater levels. The label-maker tape for May 19, 2013 is just above the door handle. May 3, 1989, is five feet above the floor.

Those years, the Yukon had a dynamic breakup, when ice jammed in river channels and backed the river into town.

In 2016, the experts did not see a reason for alarm. An ice jam downstream of Eagle had broken in the early morning hours, sending its chunks to the Charley River area about midway to Circle. But the team had flown over the curved branches of the river just downstream from Circle. They found ice in those critical jamming areas was rotten and weak.

“If we have a nice breakup, I’ll be happy,” said Earla Hutchinson, who owns the H.C. Company Store with her husband Dick, a Circle resident for 50 years.

“You’ll know in 24 hours or so,” Plumb said. He mentioned that the ice from the Eagle jam and the released pulse of river water were on their way.

As that energy moved toward Circle, the heat of the 55-degree day combined with the warmth of the water to further dissolve river ice. Sheets and chunks were holding fast at the Circle shoreline, but Plumb wrote in his field report based on the day’s flights that the threat to Circle and Fort Yukon, the next village downstream, was very low.

Leaning on the counter in the store, Earla Hutchinson said it was unusual to think of the ice clearing out from Circle so soon after a jam broke near Eagle.

Later that evening, as yellow-rumped warblers sang in birch trees, Circle residents drove their pickup trucks to the flatness of the boat landing. Some got out and talked, others stayed in their trucks, squinting out at river ice. A few tossed logs on a bonfire down by the ice.

Just before 9 p.m, the ice groaned and shifted. It started tumbling downstream, making the bank shudder. Chunks shoved up on the boat landing, forcing people to step back. River ice overtook and quenched the bonfire. The Yukon roared with hollow clunks heard once each year.

Thirty minutes later, the water was running free of ice except for random, harmless bits. On April 29, it was the earliest breakup on record for Circle. The average breakup date there is May 10.