Stronger winds and thinner ice are forcing Alaska polar bears to work harder to remain in Alaska, according to scientists who have studied increased movements of both sea ice and bears. 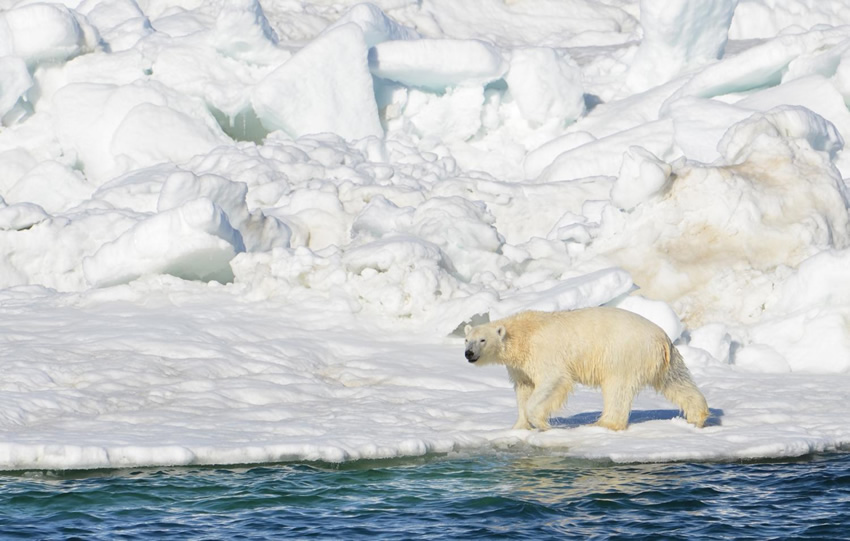 He and others compared wanderings of polar bears from two periods and found the bears now need to capture and eat as many as four additional seals each year to overcome faster-moving ice and stay in areas they prefer.

“That may not seem like a lot, but keep in mind that’s at a time when their habitat to hunt seals is shrinking,” he said.

While studying the movements of satellite-collared female polar bears (collars don’t fit on males because their necks are larger than their heads), Douglas and his colleagues also looked at ice drift off the northern and northwestern coasts of Alaska.

“Not only is the ice pack thinner and more responsive to wind forcing, there’s an increase in wind forcing as well,” he said. “The ice is drifting faster under the feet of polar bears in the Beaufort/Chukchi (sea) region.”

The ice moves an average of 4 to 5 kilometers each day north of Alaska. If a bear off the coast near Point Hope stood still on a raft of sea ice, within a few months it would be off the northern coast of Russia, Douglas said.

Polar bears can survive anywhere they find food, but they seem to prefer the area in which they were born. Bears appear to be working harder off the coast of Alaska than they did 20 years ago.

“To remain in Alaska, they have to compensate for a faster moving treadmill,” Douglas said. “They either need to walk faster or for more hours in the day.”

Merav Ben-David of the University of Wyoming calculated the extra energy polar bears used in the period of 1999 to 2013 compared to 1987 to 1998. The earlier period was a time with both more and thicker sea ice. She specializes in animal physiology and created a model based on the oxygen consumed by captive polar bears walking a treadmill.

Ben-David figured lone polar bears might need to eat one extra seal per year. Adult seals can weigh 100 pounds. Mother bears with young need as many as four extra seals each year to compensate for faster ice. Bears hunt by crouching at the seals’ breathing holes in the sea ice, a shrinking platform that may disappear in summers by mid-century.

“Not only do you have more seals to consume, you have less time to do it in,” said Ben-David, a former University of Alaska researcher. “The cubs just don’t make it. Together with their mothers they are moving more and they’re getting less food.”

Southern Beaufort Sea bears are showing signs of stress, Douglas said, with a decreasing population, while Chukchi Sea bears appear to be in good shape.