On a damp island far out in the Aleutian chain, a secret weapon of Japan’s World War II Navy sinks into the sod. A Type-A midget submarine the shape of a killer whale was one of six the Japanese carried to Kiska Island in 1942.

Debra Corbett, an archaeologist who spent five weeks on Kiska last year, has imagined the plight of elite Japanese seamen assigned to operate the subs. Two men squeezed into the ship, which historians compared to torpedoes that could fire smaller torpedoes at ships from point-blank range. 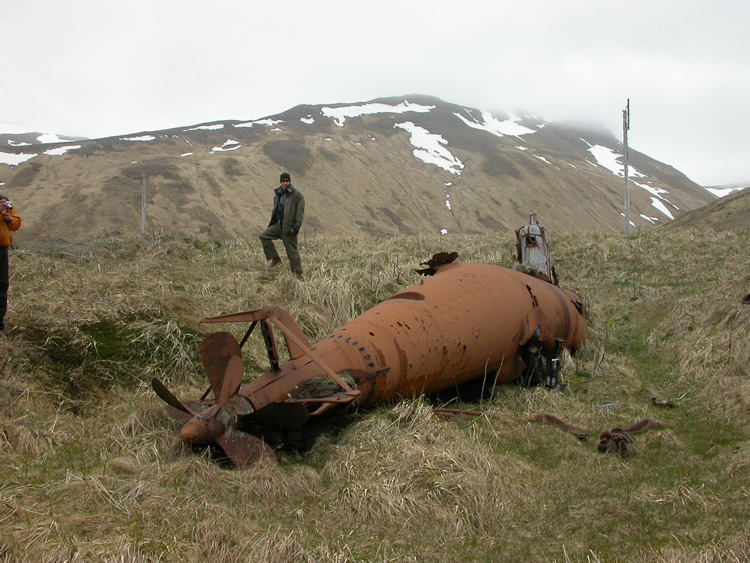 Biologist Jeff Williams near a midget submarine on Kiska Island in the far west Aleutians in 2004. Photo by Ned Rozell.

“I don’t know if you’re claustrophobic, but I couldn’t imagine a worse job,” Corbett said.

Corbett and graduate student Richard Galloway have highlighted the Kiska midget sub on their blog for the Aleutian Island Research Group, a collection of scientist who share ideas about a unique place on Earth. Corbett, now operating a consulting business, retired in 2013 from her position as archaeologist with the Alaska Maritime National Wildlife Refuge, the keepers of the Aleutians based in Homer.

While looking for prehistoric sites on Kiska, of which there are many, archaeologists bump into reminders of the Japanese presence on Kiska during World War II. The 78-foot submarine lies in the long grass off Kiska Harbor. It rests at the site of a base complete with rails to move the subs into and out of the ocean and a few sheds to shelter them.

The sub is like an unprotected museum piece into which infrequent visitors can wedge themselves into its shards of rusted metal. They can imagine what it must have been like to be the pilot or navigator, only one of whom was able to stand in the sub at any moment.

“This was not the suicide sub, but it was not known for a high survivability for the occupants, either,” Galloway said. “The Japanese were more willing to give their life for the sake of the Emperor than most U.S. troops were. This tiny sub is a good symbol of that.”

Kiska seems an odd place to deploy the subs, which ran on battery power. Their range was 90 miles at six knots, and the subs could dive to 100 feet. The crew could not recharge the batteries at sea and depended on being recovered by another ship. The Japanese used several of the midget subs during the attack on Pearl Harbor.

Japanese leaders wanted to deploy six of them at Midway Atoll, but after defeat there they diverted the subs to Kiska in July 1942.

Though the Japanese were only at Kiska 14 months before evacuating under cover of fog, the presence of the sub base, an underground hospital and big hillside guns show their long-term plans.

“Most people think Japanese occupation of the Aleutians was ephemeral,” Corbett said. “But their defenses on Kiska were pretty formidable. They had anti-aircraft guns up and down the valleys. They had six Shinto shrines and a float-plane base. They had pretty much dug in there for the long haul.”

The World War II Japanese attacks and occupations in Alaska involved three places. The Japanese bombed Dutch Harbor on June 4, 1942. They landed and set up bases on Attu and Kiska two days later. American troops recaptured Attu in a bloody battle in May 1943.

American and Canadian forces then landed on Kiska in August 1943. Expecting heavy resistance, they found the Japanese had escaped the island before the invasion. Before they left under cover of thick Aleutian weather, Japanese troops disabled the midget submarines with explosives.

Americans who then occupied Kiska cut up one of the subs for scrap metal. A few are perhaps at the bottom of Kiska harbor. Part of another lies belly-up on a Kiska beach.

The recognizable one remains in the grass of the old sub base on the unoccupied island, as far from northern Japan as it is from Anchorage. Few people have seen the brown-orange reminder of when war came to Alaska. A deadline for that experience is approaching.

“Although the metal items on Kiska are surviving far better than the same items in the South Pacific, (the sub) will likely rust into oblivion,” Galloway wrote.