Skip to content
Previous Next
Spillways Of An Ancient Alaska Lake

Spillways Of An Ancient Alaska Lake

Many years ago, geologists stood on the bank of the Copper River and watched Childs Glacier thunder icebergs straight into the river. Using a little imagination, one researcher remarked how an advance of the glacier could seal off the big river.

He envisioned a process that has happened many times in the world and is still happening in Alaska: glaciers growing to the point where they block rivers and streams to form lakes. 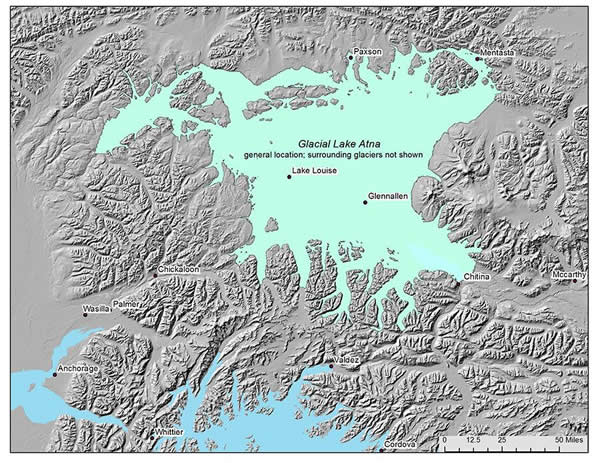 The possible boundaries of ancient Lake Atna, a giant water body that existed thousands of years ago.
Courtesy of Michael Wiedmer

Lake Atna filled the Copper River valley from about 60,000 to 10,000 years ago. Glennallen, Copper Center and Gulkana were underwater then, in the depths of a water body twice the size of Great Salt Lake.

When glacial ice receded, Lake Atna drained in pulses, some of them immense. Scientists have found six-foot boulders and other evidence of the lake bursting northeast through Mentasta Pass and into the Tok and Tanana river drainages. The lake also drained down the Copper River when the Allen, Miles and Childs glaciers receded.

There are other spillways that helped empty Lake Atna. One is to its northwest near the Susitna River. Another is into the Matanuska River through Tahneta Pass, now the route of the Glenn Highway from Glennallen to Palmer.

Along this route, Lake Atna might have burst free with enough water to deposit dunes more than 100 feet tall near Wasilla. It might have been one of the largest floods ever.

A cigar-shaped fish helped lead Michael Wiedmer to that theory. Wiedmer was working as a biologist for the Alaska Department of Fish and Game one decade ago when a floatplane pilot brought in the carcass of a pygmy whitefish. The pilot had found it in Lake George, at the head of the Knik River in the Chugach Mountains.

Wiedmer wondered how the small fish had reached the isolated lake. He knew that pygmy whitefish were in several lakes that are remnants of Lake Atna. Had Lake Atna water somehow reached Lake George?

Wiedmer was working on a different project in the Matanuska Valley when huge, symmetrical hills in the Meadow Lakes area of Wasilla caught his attention. The ridges, piles of gravel and boulder, are now covered with forest. The Parks Highway crosses them between Wasilla and Houston (a hill at Gorilla Fireworks is one of them). In between the ridges are Beaver, Meadow and other lakes oriented like salmon swimming upstream.

“I don’t know another mechanism that could create these forms other than flowing water,” Wiedmer said.

He then spent several years looking for signs of a megaflood down the Matanuska Valley about 17,000 years ago. He wrote a 2010 paper based on the “Wasilla Dune Field” that may be the legacy of the catastrophic draining of ancient Lake Atna into Cook Inlet through the route of today’s Glenn Highway.