While slicing a cylinder of mud he pulled from an Interior Alaska lake, Matthew Wooller ran into a snag. The wire he was using to cut the mud stopped when it hit something solid. He grabbed a knife, carved around the obstruction, and made a discovery.

“There were a bunch of bones and very sharp teeth sprouting from the lake mud,” said Wooller, the head of the Alaska Stable Isotope Facility at UAF. 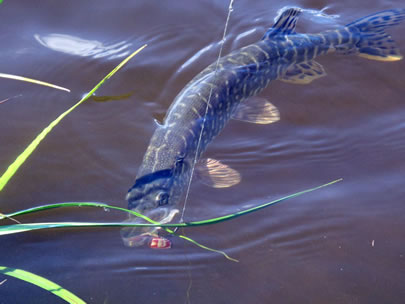 A northern pike caught at the mouth of the Kandik River. Photo by Ned Rozell.

Suspecting the pinky-size fragment of a toothy creature was thousands of years old, Wooller ran it up to the UA Museum of the North. There, experts could tell him whether the bone was fish or fowl.

Andres Lopez, curator of fishes, recognized the jawbone of a northern pike, a duck-billed, needle-toothed super predator among freshwater fishes.

“The chance of putting the 4-centimeter barrel of the coring head through a skull like this . . . I have never seen this before,” Wooller said.

The pike jawbone was not something Wooller imagined within a 20-foot-long plug of sediment he and his colleagues pulled from Quartz Lake a few winters ago. Much smaller things within the core — ancient birch and spruce seeds, shells of tiny clams and bits of charcoal — were the gold Wooller was mining. The carbon dates from those things told him the lake formed about 11,000 years ago.

Working out of the cabin of Dave Klein, an emeritus wildlife ecologist at UAF and one of many private landowners on the lake, Wooller and his colleagues pulled up the core with some difficulty in March 2010. The core resulted in a paper in which researchers dated the lake and a time the nearby Tanana River flooded it about 3,000 years ago.

The northern pike jaw found 14 feet deep in the muck of Quartz Lake is 8,800 years old. DNA extracted from the jaw shows the pike is related to pike that now swim the fresh waters of Eastern Asia and North America.

The Quartz Lake pike tells researchers that pike were probably present 8,000 years ago in the entire Tanana River watershed downstream of Quartz Lake, waters that connect to the Yukon River. It also hints that during the height of the last Ice Age, when New York City was buried in ice but Interior Alaska was not, northern pike were probably darting through the fresh water bodies of the Bering Land Bridge.