Water Fountains in the Tundra

While tightroping on tussock heads in a bog off the Chandalar River, two companions and I heard a waterfall. Strange.

Looking through binoculars, we saw a knee-high fountain of clear water in the tundra. The flow was as thick as your leg. We squished over to investigate. 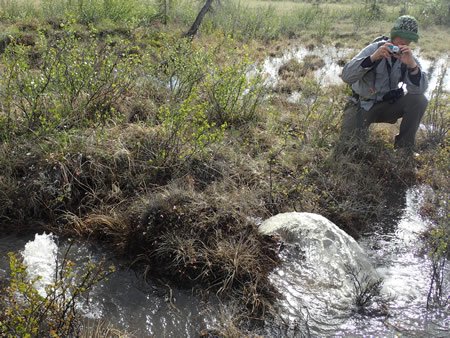 The three of us had never seen water spewing from the ground in such a way. The clear water was so cold it burned, forcing us to pull our hands back after a second or two.

A few days later, on our flight out of the bush, pilot Dirk Nickisch said yes, he had seen tundra “hydrants” in a few arctic valleys. When I got back, local experts watched this video.

They theorized that we had seen the effect of high-pressure groundwater finding a way through permafrost.

Dan White is a hydrologist by trade who wears his Xtratuf boots less often now as the University of Alaska’s vice president of academic affairs and research. He thinks the hydrant may be an artesian well pressurized by a permafrost barrier.

“Looks like water entering the subsurface from higher on the mountain,” he wrote in an email. “That is just the place it found to get out through the frozen ground. My guess is that water is channeling though a thawed ice wedge or something.”

The gusher is about 75 miles north of the Arctic Circle, on the south slope of the Brooks Range. That part of northern Alaska has remained cold enough to preserve permafrost — ground that remains frozen through the heat of at least two summers (it often has endured thousands of summers). The area featured other permafrost-related landforms, such as a house-size pingo. We ate lunch on top of the mound one day, noticing the birch trees that grew on it were rare in the surrounding spruce forest.

Permafrost researcher Kenji Yoshikawa said sometimes pingos and frost blisters generate fountains. He thinks what we saw might be related to a frost blister, a pimple caused when freezing ground in early winter blocks groundwater already restricted from beneath by permafrost. The fountain we saw might be what happened when the pimple popped.

Water held under pressure by permafrost can be a problem if we try to use it. In 1946, workers for the Army Corps of Engineers drilled a well near the eastern end of Farmers Loop in Fairbanks. They penetrated a permafrost layer and the non-frozen layer beneath it. At about 100 feet, they hit water. It was under so much pressure a four-foot gusher erupted from the drill hole.

Water flowed around the well casing in what engineers called an “uncontrolled artesian well.” Corps workers pumped cement down the casing to seal the well. They topped it with a 10-foot square of concrete that was one foot thick.

“In August 1948 the final loss of control occurred,” wrote geologist Troy Péwé in the chilling publication, Geologic Hazards of the Fairbanks Area. “Water began escaping from beneath the 10-foot square, and during the summer of 1949 the slab collapsed into an enormous, water-filled thermokarst cavity. Eventually the slab sank as much as 50 feet below the surface.”

Two years later, engineers injected refrigerant brine in the ground and installed freeze probes around the wellhead. That refroze the well shaft and reestablished the permafrost seal.

Thirty years later, a drilling company sunk a well in the same area. It flowed out of control all winter, covering a portion of Farmers Loop with two feet of ice and inspiring lawsuits from local homeowners whose houses and cars became glaciated.