Skip to content
Previous Next
The Northern Boreal Bird Nursery

Two-hundred miles straight north of my home in Fairbanks, I’m at the northern edge of a forest that carpets the continent all the way to Labrador. Here for a meteorite search with an astronomer, I have helicoptered into a place humming with life.

This dark spot on the nighttime map of North America is not always in this active state, with the squeak of bank swallows overhead and passing bumblebees so heavy with pollen they fly like water balloons. A few months ago, this gray river was hard as a stone. An online thermometer nearby registers a dependable minus 50 F every winter. 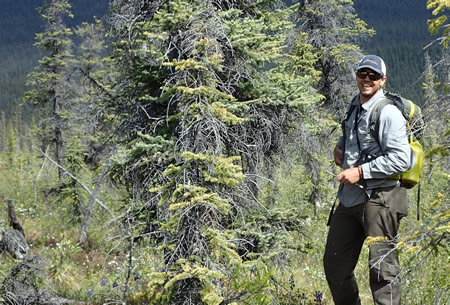 In early summer, the air is perfumed with blooming purple lupine and pink wild sweet pea. It’s so fleeting, and such a contrast to the locked, odorless winter. Songbirds sing from every direction — tiny warblers, thrushes and sparrows have flooded the spruce and spongy ground beneath them.

In the past few days, meteor astronomer Peter Jenniskens, Fairbanks guide Garrett Jones and I have noticed that looking for meteorites is a lot like searching for bird nests. We find none of the former but a few dozen of the latter.

Flushing a bird from a nest is an unexpected, pleasant event. We always stop, happy for the break from squinting at the ground. Even though he feels pressure to find black rocks from space, Peter, of the Search for Extraterrestrial Intelligence Institute, pauses to contemplate nests. He found curious that a water bird like the lesser yellowlegs was sitting on four eggs on open tundra a mile from the river. The mother’s scolding peeps hurt our ears. We moved on.

Garrett is the most frequent nest-finder, specializing in robins with newborn chicks that reach with open beaks to his camera lens. Near a nest in a tangle of spruce branches, the mother chips from a neighboring tree. If the four in this nest survive, they will grow to full size on the insect riches of this country. In a few months, they will show up on a lawn in Kansas City or a hill outside Mexico City.

We chose to camp on an island of the Middle Fork Chandalar River. The leafy place is also the choice of several mother songbirds. When he walks to his tent, Peter can’t help but flush a white-crowned sparrow from her nest woven into willow stems. And the junco basement apartment he found 50 yards away may produce a chick that arrives as a handsome slate-and-white adult at his feeder in Mountain View, California this December.

Five feet above the mother junco sits a yellow-rumped warbler on her birthing chamber of last year’s grass woven into a perfect circle. She does not fly away from the balsam poplar as we take images and marvel at the density of nests on our two acres of island. Extrapolate that into the few square miles we are getting to know and we are surrounded by thousands of new beating hearts.

The warbler has had enough of us. She jumps to reveal five cream-colored eggs. Before summer is over, the chicks will leap into the air and leave the Chandalar country. They will flap and glide beyond the cooling forest of spruce and muskeg. They will follow the spine of the Rockies, pausing a few times to feed. When the deep cold returns to this country and the online thermometer at Chandalar Lake reads minus 48, the warblers will be hopping branches in the steamy mangrove jungles of Panama.