Skip to content
Previous Next
Mosquito Season Starts In Alaska

Sluggish mosquitoes, sprung from the leaves where they overwintered. Moths and butterflies flitting the fields and south-facing slopes. Beetles skittering along in pinstripe-grooved exoskeletons. 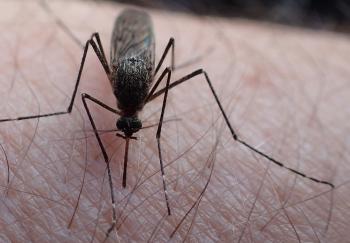 One of the 17 trillion mosquitoes,
Photo by Ned Rozell

How many insects are stirring on the surface of Alaska? That’s a fun but hard-to-answer question that Derek Sikes recently pondered in response to writer and wilderness guide Michael Engelhard. I was a middleman in their e-conversation. I figure that entitles me to post Sikes’s calculations based on Engelhard’s question:

“Is the biomass of mosquitoes on the North Slope larger than that of all caribou?”

Sikes is curator of insects at the University of Alaska Museum of the North. He is also a great Alaska traveler who has peeked under rocks from the end of the Aleutians to the naked tundra of northern Alaska. He adds to the museum’s collection on every trip.

Here are some of his numbers, based on his own and others’ studies. They are best-guess estimates from fuzzy totals of things quite difficult to count.

“This is a weight for all Alaska,” Sikes said in his answer to Engelhard. “Thus it seems that there is not a greater weight of mosquitoes in Alaska than caribou.”

Sikes based his cyphering on a paper written by a Swiss scientist who checked the assertion that British spiders ate more insects by weight than the poundage of all the people in Great Britain. Entomologists made the claim to illustrate that spiders kill and consume “astronomical” numbers of insects. The Swiss scientist concluded that British people probably outweighed the insect victims of spiders, but not by much.

Sikes ran the numbers for Alaska spiders, and discovered this: Alaska spiders likely catch and eat more pounds of insect each year than the combined weight of all Alaskans.

He calculated that during our summer population boom we humans press down on the state with 442 million pounds. Spiders eat as much as 6.79 billion pounds of insects each year in Alaska.

The next time someone shrieks at you to kill a spider (I’m thinking of an eight-year old girl I know), remind her she would be swimming in bugs without them.