A Yearly Flood into the Gulf of Alaska

Satellite data has confirmed that the amount of freshwater released into the Gulf of Alaska from streams and rivers in Alaska and northern Canada is about 1.5 times what the Mississippi River dumps into the Gulf of Mexico each year.

That astounding flow of water is from rainfalls that soak Southeast Alaska and the south side of the Alaska Range. The other half comes from the melting of snow and ice from glaciers.

Anthony Arendt is a glaciologist and an author on a recent paper in which researchers used different pieces of information to determine the fresh water input to the northern Pacific from Alaska and northwest Canada. He works at the Geophysical Institute at UAF and has studied data from a NASA mission that features two satellites orbiting Earth about 300 miles above our heads. 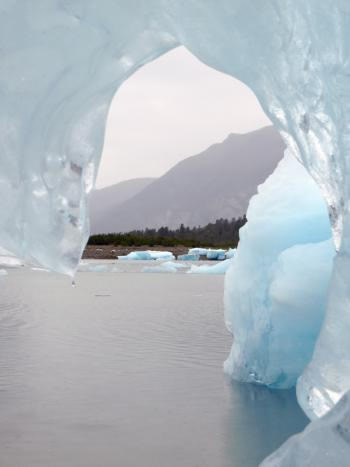 Ice like this in Glacier Bay is among the fresh water flowing from land to sea in southern Alaska.
Photo by Joanna Young.

Those instruments measure gravity while racing around the planet in formation about 137 miles apart. Arendt and many other scientists have used this gravity information to calculate changes, in his case the loss of ice and snow from glaciers and massive icefields in Alaska and northern Canada. His data confirmed work done since the 1980s based on stream gauges, weather station data and computer models.

Some perspective on southern Alaska adding 1.5 times the Mississippi each year to the Pacific Ocean: the Mississippi River drains 31 states and two provinces. Ranked by discharge, it is the 10th largest river on the planet. The Yukon, which we tend to think of as big, is 41st.

So, the mountains and rainforests of southern Alaska are dumping a lot of water into the ocean. What does that mean? Fresh water helps power ocean currents that carry heat to cooler places. Glaciers gather lots of bits and pieces of life that, once transported by meltwater, feed tiny things in the ocean, which feed salmon and other creatures. Glacial rivers move the stuff of life, carbon, and redeposit it to the sea. Glacial melt increases sea level. And Alaska and northern Canada are moving water like a fire hose that grows in diameter each summer.

How does Alaska’s freshwater runoff compare to other icy places? Even though its streams and rivers dump an enormous amount of water into the oceans, Alaska gains a lot of that water back in the next winter’s snows. Alaska contributes about 4 percent of global sea level rise.

Greenland releases about one third the amount of water Alaska does, but is responsible for 20 percent of current sea level rise. This is because much of Greenland’s water is from glacier ice that had been locked away.

What happens next? Alaska glaciers will probably shrink by a quarter of their current volume by century’s end. Runoff will be larger at first, followed by a decrease as the glaciers shrink. But the story, as are most of this magnitude, is complicated.

“Climate change will likely create greater seasonal extremes, and warming will alter the boundary between rain and snow in the atmosphere,” Arendt said. “With those kinds of changes, we expect the magnitude of the annual water cycling to increase in the future.”