As pungent eucalyptus trees soaked up inches of California rain, a few researchers inside San Francisco’s Moscone Center spoke of the treeless third of Alaska at the 2014 fall meeting of the American Geophysical Union. The annual gathering of Earth and space scientists attracted more than 20,000 of them to San Francisco in late December.

Alaska’s tundra landscapes carpet a good portion of the state, from the North Slope to the elbow of the Alaska Peninsula. Tundra is a gathering of hardy shrubs, sedges, grasses, mosses and lichen that live in knee-high communities above soil frozen hard as concrete. 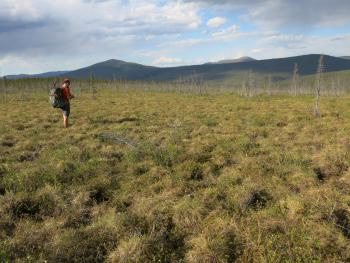 Kimberly DeGrandpre spent the last two summers amid the small plants of the Seward Peninsula and Yukon River Delta. She visited villages that are just a few feet above sea level to measure how much the land is rising or falling. DeGrandpre, a graduate student with UAF’s Geophysical Institute, set up GPS receivers near villages and let them run for at least three days.

“I spent a lot of time on gravel runways in small villages,” she said. Village airstrips are often on some of the highest ground. There, surveyors sunk benchmarks — brass discs atop rods driven into the earth or exposed bedrock. She resurveyed these points with GPS as part of a campaign to create a coastal hazard map for Alaska that will show places vulnerable to sea-level rise.

“The rest of America has (a coastal hazard map),” she said.

DeGrandpre’s fieldwork is part of Nicole Kinsman’s effort to map Alaska’s thousands of miles of coastline and determine the risk to low-lying villages. Kinsman, a geologist with the state’s Division of Geological and Geophysical Surveys, is also using spotty tide-gauge data, satellite information, aerial imaging and beach surveys to determine the future of Alaska where the sea meets shore.

At sites on the Seward Peninsula, the tundra nose of Alaska that juts into the Bering Sea, DeGrandpre found the land was sinking by as much as one-fifth inch each year.

She figures that subtle drop is the legacy of when the Laurentide Ice Sheet covered most of North America 20,000 years ago. Near the height of that cold period, the unglaciated area that’s now the Seward Peninsula ballooned up due to the sheer weight of the ice pressing down on the continent nearby. As the great mass melted, the ground beneath it rebounded. Thousands of years later, it is still rising. The former “forebulge” of Beringia that is now the Seward Peninsula falls ever so slightly in memory of the last ice age.

Another tundra story reported on at the conference is occurring at Imnavait Creek, a quiet little drainage north of the Brooks Range. There, in 2013 UAF’s Donie Bret-Harte harvested patches of tundra vegetation using the same methods plant ecologist Gaius Shaver had 30 years earlier. She weighed all the moist, acidic plants she extracted from 20 precise squares of ground. She came up with bags of greenery three times heavier than what Shaver measured in the 1980s.

“It seems as if everything got bigger over that time period,” she said. “It was a pretty big change. I was stunned.”

Changes at Imnavait Creek mirror those at nearby Toolik Field Station, she said.

“There’s been a regional signal.”

Despite an explosion of greenery on that part of the North Slope, air temperature records at Toolik Field Station don’t show an increase since the 1980s.

“The ecology is showing warming but the temperature trends don’t show it,” Bret-Harte said.

Why did plant life in this frigid place triple in mass without air temperatures warming? Bret-Harte said permafrost temperatures about 60 feet beneath the surface have warmed during the period. Improvements in temperature-sensor technology might be the reason warmer temperatures weren’t observed, she said. Changes in snow-cover, which insulates the ground, might also play a part.