To anyone who has ever seen one, the sperm whale (Physeter macrocephalus) is among the more bizarre-looking animals on our planet. With its wrinkled skin, giant head, and large teeth arrayed in an oddly underslung jaw, it looks less like a creation of Planet Earth than something put into the world’s oceans as a prank by extraterrestrials. Yet this remarkable animal has probably been around for longer than any other living cetacean–perhaps as long as 25 million years–and it is superbly adapted to the pelagic ocean environment in which it expends its long life span. Sperm whales may well be the deepest-diving of all mammals: they can hold their breath for more than 2 hours in extreme cases, and there is good evidence that they can dive to depths of around 10,000 feet. They are a highly socially evolved species, with strong familial bonds evident in groups that travel, forage, and foster their young together. They are found in all the world’s oceans and travel thousands of miles on their wanderings.

None of these characteristics, however, saved sperm whales from human greed.

Sperm whale on the flensing deck at one of the Soviet Kuril Islands whaling stations. Photo by A.V. Yablokov.

Scientists with the Center’s National Marine Mammal Laboratory (NMML) report on the former U.S.S.R’s illegal whaling of this species, which was was conducted secretly and on a massive scale, with size limits and other regulations largely ignored. (Japan was also killing large numbers of sperm whales and falsifying data.) With their discovery of formerly secret Soviet whaling industry reports which had not been destroyed but were in Russian public archives containing the true catch data, (unlike the falsified records that were submitted to the International Whaling Commission) NMML scientists are attempting to wring as much information as possible from the illegal whaling data, with the hope that the Soviet bureaucrats’ obsession with detail can now be put to use in the service of a better understanding of how to conserve this remarkable species. 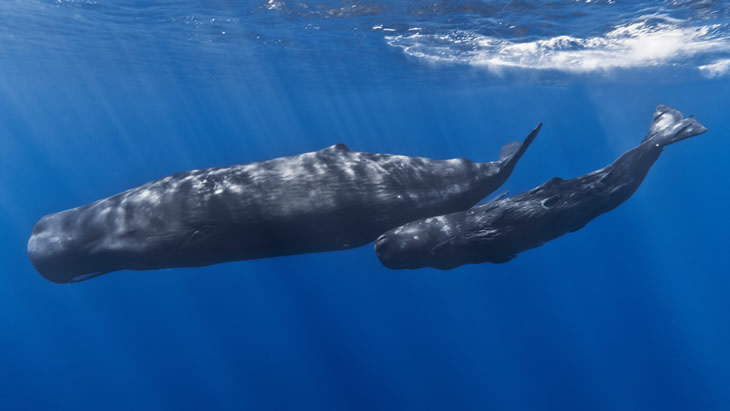 A long history of exploitation:

None of these characteristics, however, saved sperm whales from human greed. Although sperm whale meat is definitely not good to eat–it is so highly oxygenated that it is truly black rather than dark red–the whale’s oil is of extraordinary quality, and for many years whale oil quite literally lit the streets of the industrialized Victorian world. Sperm whale oil maintains its lubricative powers at extremes of temperature, and as a result it was much sought-after for use in everything from watches to heavy machinery. Beginning in the late 18th century, American whalers began seeking out sperm whales farther and farther afield from their home bases in New Bedford, Nantucket, and other New England ports. They were joined in these predatory explorations by vessels from other nations, and sperm whalers were often the first westerners to discover new areas of ocean (and sometimes even new lands). So valuable was sperm whale oil that voyages of 4 or even 5 years, taken to the other side of the world, became common during the height of historical whaling in the 19th century. Through examination of old whaling logs and other historical records, retired NMFS biologist Tim Smith and colleagues estimated that, between 1712 and 1899, some 300,000 sperm whales were killed worldwide, most by sail-based whalers who chased whales from small open boats and used hand-held harpoons and lances to kill them. Occasionally a sperm whale had the upper hand: the most famous case is that of the Nantucket whaler Essex, which was stove and sunk by an angry male sperm whale in the Pacific Ocean in 1820; the crew were subsequently forced to endure months in an open boat and eventually resorted to cannibalism before finally being rescued. But although this incident was dramatic (it inspired Herman Melville’s clas­sic novel Moby Dick) it was an exceptional event even then; and when the invention in the late 1800s of steam-powered catchers and explosive harpoons ushered whaling into a modern, industrialized era, no whale anywhere was safe.

Read the rest of the story here (PDF).