Snow-starved Alaska not the normal state

During the first 21 days of November 2014, no recordable snow fell in Anchorage, Juneau or Fairbanks. Over an unusual swath of the state, the ground was frozen, dusty and brown. Even extreme parts of Alaska were in a snow drought.

“No manual observation site has even had 10 inches of snow this month, including the usually snowy places on the south slope of the Alaska Range or northern Southeast,” said Rick Thoman, a go-to weather history guy with the National Weather Service in Fairbanks. “The North Slope is the only area with even remotely close to normal snow.”

The lack of white that represents Alaska at its most common (much of the state is snow-covered for three-quarters of the year) affects many things. 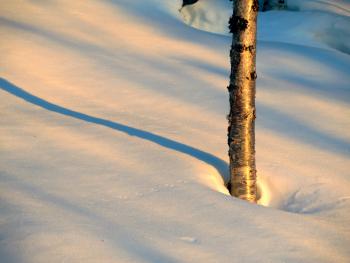 Some far-north life forms have adapted to depend on that blanket of snow. Both low-bush cranberries and wood frogs can survive cold air, but each would die in a winter without snow. UAF plant person Pat Holloway once found cranberry bushes perish when exposed to air colder than minus 12 Fahrenheit. UAF’s Brian Barnes found wood frogs can survive to minus 10 but also cannot take a prolonged hit of minus-40 degree air.

Bearberry, yellowjackets, voles and dozens of other species survive in Alaska and other northern places because of dependable snow cover. Each lovely flake joins spiked arms with others to create an air-trapping matrix above the ground surface. Those who have measured that zone, like Geophysical Institute Professor Emeritus Carl Benson, have found the ground beneath the white blanket remains a consistent 27 degrees Fahrenheit no matter the temperature above.

That relative warmth, the remnants of summer’s heat released as the ground freezes, allows billions of small bodies to survive winter.

Snow-assisted organisms like frogs, wasps and berry bushes are supercoolers. A supercooler has developed the remarkable ability to rid fluids in its body of impurities that trigger the formation of ice.

Some have taken cold adaptation a step farther. Many trees and some spiders that hang out in them are freeze tolerant. Northern aspens and beetles have the superhuman ability to force liquid out of their cells. That dryness prevents spikes of ice from puncturing cell walls (which happens when we get frostbite).

As I write, for the first time in weeks snow is spiraling in airy clumps to the ground. It is dusting the spruce, cheering the mood and freshening a dour landscape. Listening to the hiss of frozen water disguised as fluff, one wonders if a vole can feel the warming, hear the man sounds fading and sense the return to the most familiar season.