Skip to content
Previous Next
Dinosaurs in the Wrangell Mountains

Dinosaurs in the Wrangell Mountains

The more Tony Fiorillo explores Alaska, the more dinosaur tracks he finds on its lonely ridgetops. The latest examples are the stone footprints of two different dinosaurs near the tiny settlement of Chisana in the Wrangell
Mountains.

Fiorillo, a dinosaur hunter with the Museum of Nature and Science in Dallas, recently wrote of the foot impressions of a large plant-eater and small meat-eater in the science journal Cretaceous Research. Fiorillo is a yearly summer visitor to Alaska who seems to discover something exciting on every trip. 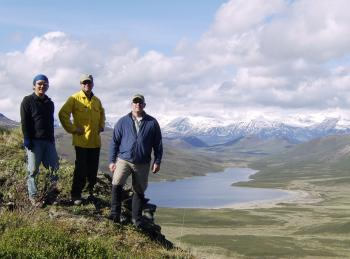 From left, Yoshi Kobayashi, Tony Fiorillo and Tom Adams in the Wrangell Mountains near where they discovered dinosaur tracks.
Photo courtesy Tony Fiorillo.

His latest published find is based on his travel to the Wrangells in 2008 with Thomas Adams of San Antonio College, Yoshitsugu Kobayashi of Hokkaido University and Linda Stromquist of the National Park Service. Fiorillo had read about prehistoric plant fossils that others found in a streambed near Chisana. That type of vegetation in other places sometimes leads to dinosaur fossils.

“That was the year there was no summer,” Fiorillo remembered of the rainy, cool 2008. “But for 12 days in the Wrangells, we had unbelievable weather. It may be the most beautiful field experience I’ve ever had.”

Not long into the fieldwork, Fiorillo picked up a plate-size rock and held it up in the sunshine. He could see the impression of the middle toe of a three-toed dinosaur; by squinting at the rock as he turned it, he could make out a print pressed into the ground by a hefty creature that stomped past 70 million years ago. Close by, he recognized another print, the track of a smaller, zippy meat-eater.

He called over his colleagues one by one and didn’t tell them a thing. Instead, he asked them what they saw. One spotted the plant-eater track right away; the other pointed out the meat-eater’s print. The moment marked the first official records of dinosaurs in Wrangell St. Elias National Park.

Fiorillo described the two Wrangells dinosaurs: The larger one is a hadrosaur, a duck-billed dinosaur taller than most men and heavy as a car. The hadrosaur, similar to those that left tracks on Alaska’s North Slope and other areas of Alaska, ate plants, possibly the many ferns that also left their fossils behind in the area. Fiorillo envisions the Wrangells of 65 to 70 million years ago as a “fern prairie.”

The second track is from a therapod (a group that includes, on the large end of the scale, T. rex). “This little guy ran around on two legs, might have been six feet from snout to tail and had a bunch of little pointy teeth and sharp claws,” Fiorillo said. “He was eating meat, but there was a lot of this ecosystem we didn’t pick up (fossils that would indicate what the dinosaur as tall as a kindergartner was eating).”

With these finds, and more to be announced once the publishing cycle catches up with Fiorillo’s recent discoveries, Alaska in the time of the dinosaurs is coming into focus.

“The Wrangells is a new area for dinosaurs, an area that looks very different from the North Slope and Denali (areas where similar
dinosaurs lived),” Fiorillo said. “There’s this stereotype of Alaska being barren, of not much going on but people and other animals freezing all the time. But 70 million years ago, the ecosystem in the ancient high latitudes was biologically very productive.”

Soon, Fiorillo will flee the blistering heat of Dallas for the breezy ridgelines of Alaska. This summer, he returns to both Denali National Park and a bend of the Colville River rich with the hardened remains of dinosaurs. Up north, he’ll search for clues as to how dinosaurs could have survived the darkness of winter, even though Alaska was as warm as Washington state millions of years ago. In Denali, he’ll continue exploring a rich area he started on last year, and try to flesh out a “completely bizarre” dinosaur he believes existed there.