Skip to content
Previous Next
1946 tsunami survivor shares her story

on April 1, 1946, the sea floor ruptured just south of Unimak Island in the Aleutian Islands. Seawater displaced by the giant earthquake sent a 100-foot wave into the Scotch Cape lighthouse on Unimak, destroying the concrete structure and killing the five men inside. They never knew what hit them in the 2 a.m. darkness.

The residents of Hilo, on Hawaii’s big island, were also unaware of the danger surging across the North Pacific. Four hours and 20 minutes after the big earthquake in the Aleutians, the first of several tsunami waves reached Hawaii.

Jeanne Branch Johnston, then six years old, was in living in Hilo in 1946. She remembers a lush neighborhood of coconut trees and brackish ponds that would rise and fall with the tide. People earned their wages at the surrounding sugarcane plantations. 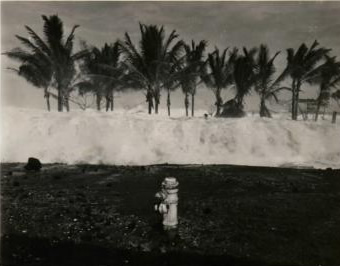 On the morning of April 1, 1946, Johnston was staying over at her grandparents’ house in Hilo. She was in her pajamas getting ready to go to school and playing with her brother when she heard car horns blaring. She took her brother David, 4, by the hand, and went outside.

The first wave from the giant earthquake had struck Hilo. Like a high tide that kept rising, it washed out part of the main road. Drivers who didn’t realize the road damage were honking at others who had stopped.

Johnston and her brother looked around at random debris and wondered what had happened, until her brother tugged at her shirt.

“There were red ants biting at David’s feet,” said Johnston, now 74 and living in Oahu. “He started whining and carrying on. I was really interested in staying out there, but he said ‘Come on, let’s go inside.’ So I took him back inside the house, which saved our lives.

A second wave rolled through Hilo, this one larger than the first. Looking from a window on the second floor of the house, Johnston saw the ocean had poured in; water had reached the height of her grandmother’s clothesline.

“I called my grandmother and said, ‘There’s water in backyard,’” Johnston said. “She said, ‘Don’t worry about it—it’s probably just high seas.’ I said, ‘I think you should come look.’ As soon as she looked out the window, she started screaming and ran for my grandfather.”

Johnston’s grandmother stayed with her grandfather, who didn’t want to leave his house despite the insistence of Johnston’s uncle, Rod Mason, who seemed to know a larger wave was on its way.

A neighbor Johnston remembers as “Uncle Eddie” took charge and gathered together people who would listen to him.

“Eddie had a machete with him, and obviously had a plan,” Johnston said.

Eddie knew the best path to safety was to get to higher ground before another wave came in. He guided a group of children—some, like Johnston, still barefoot—into the forest behind the houses, chopping a path through vines and trees with another man.

“They kept telling us to run,” Johnston said.

She remembers cutting her feet on sharp lava rocks. The images of water percolating through those rocks and floating, thorny lauhala leaves would appear for years in her dreams.

Eddie and other adults delivered the children to a radio tower and higher ground, where the kids played. When the tsunami faded, the adults gathered up Johnston and the other children and brought them back to the place where they gathered before they went into the jungle.

“(The adults) told us not to go out to the street, but it looked very interesting so I went out there anyway,” Johnston said. “I saw a house that was sitting on a bunch of cushions from chairs, then I found out why they didn’t want us to go—I saw someone’s arm sticking out from underneath a house.”

Ninety-six people died in Hilo on that April Fools Day 63 years ago, and 159 died in the entire territory of Hawaii. And, though Johnston’s family all survived, the tsunami affected her in profound ways.

“I’ve realized over the last 20 years that it had a tremendous impact on me emotionally and physiologically,” Johnston said. “I never really was in touch with it until I started doing tsunami survivor interviews myself.”

University of Hawaii professor Walter Dudley interviewed Johnston in the early 1990s about her experience. Not long after Dudley interviewed her, Johnston stopped having the dream of swimming amid spiky lauhala leaves. She found the storytelling experience so profound that she helped found the Pacific Tsunami Museum and now devotes a good deal of her time to traveling and interviewing tsunami survivors.

“I found that people are captivated by stories, but not very interested in mitigation info,” she said. “If you get them interested in stories you can teach them what to do and how these people were saved. There are always lessons in these stories.”