Skip to content
Previous Next
The dominant predator of North America?

The dominant predator of North America? 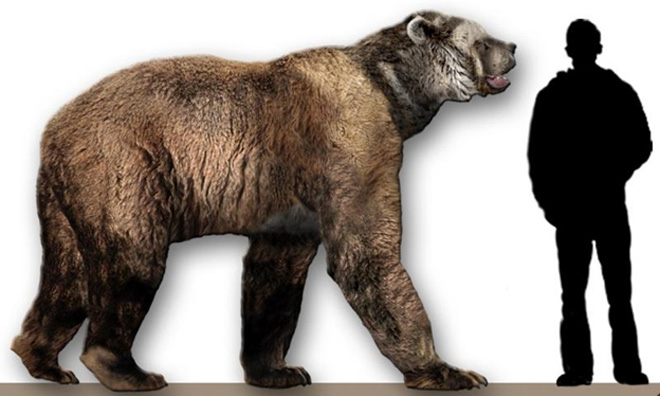 In the days when Alaska was a vast grassland, a massive bear hunted the treeless plains. Walking on four lean legs, the giant, short-faced bear loomed larger than the biggest brown bear today. A researcher once described the extinct bear as “the dominant predator of North America.”

Stirring as that description is, Paul Matheus had a problem with it. Sure, the giant bear was huge, but it seemed to be too big for its own good. Part scientist and part detective, Matheus is a paleobiologist with the Yukon government in Canada. His job is to reconstruct the lives of animals that roamed the planet thousands of years ago.

The giant, short-faced bear disappeared from its turf in Alaska and the Lower 48 about 12,000 years ago. Every now and again, the giant bear will make a reappearance, usually when a gold miner finds a skull or leg bone clunking around in a sluice box.

Using bones donated from miners and the research of others who have studied the bear, Matheus tried to piece together the puzzle of the giant bear’s life. The large size of the bear seemed to violate a basic rule of biology-there is an upper limit to how big a predator can be. These ancient bears probably weighed about 1,500 pounds. Matheus wondered if the colossal creature’s bones could take the stress of quick cuts and rapid acceleration required to chase down a horse or an antelope. Maybe it preferred less challenging meals, like a hillside of blueberries.

To find out if the giant bear was a plant-eater or at least supplemented its diet with greenery, Matheus removed small samples from the leg bones of 14 different giant bears. Using chemicals to distill the bone to a liquid, he separated collagen, a protein, from the rest of the bone. With the collagen, Matheus was able to measure ratios of nitrogen isotopes in the prehistoric bone that were consistent with a certain level found only in meat eaters.

After discovering the giant bear was a carnivore, Matheus still wasn’t sold on the idea of the giant bear as the baddest predator in North America. The giant bear’s jaw also hinted that its habits may not have been those of a predator. Matheus noticed the jaw provided its maximum torque when its mouth was half open. Since about ninety percent of the museum’s bone specimens of Ice-Age mammals are broken, perhaps the bear was the creature cleaving the largest bones in half to get at the fat-rich marrow inside.

The giant bear’s unusually large hip bones, which suggest it spent much of its time standing, also attracted Matheus’ attention, as did its extra-wide nose. All its attributes suggested the giant bear was a scavenger.

Though the notion wasn’t sexy, it made sense. The giant bear’s size and ability to stand made it an intimidating sight near any carcass. The design of its jaw allowed it to get the most out of other animals’ kills, and its lanky legs would allow it to cover an impressive home range to find animals killed by other predators of the day, including the American lion, saber-toothed cats and wolves.

If wolves survived, why didn’t the giant bear? In the days of the grasslands, a great variety of large mammals that died at all times of year kept “a trickle of carcasses on the landscape,” Matheus said. With the changing climate that inspired the invasion of trees and changed the Pleistocene landscape, animals dependent on the grasses vanished. With its food source dwindling and an apparent inability to hibernate, the giant bear disappeared.

People who attend Matheus’ public lectures are sometimes a bit bummed to learn the giant bear was not a fierce predator, he said. It could be worse. Other scientists postulate that Tyrannosaurus Rex was also a scavenger.